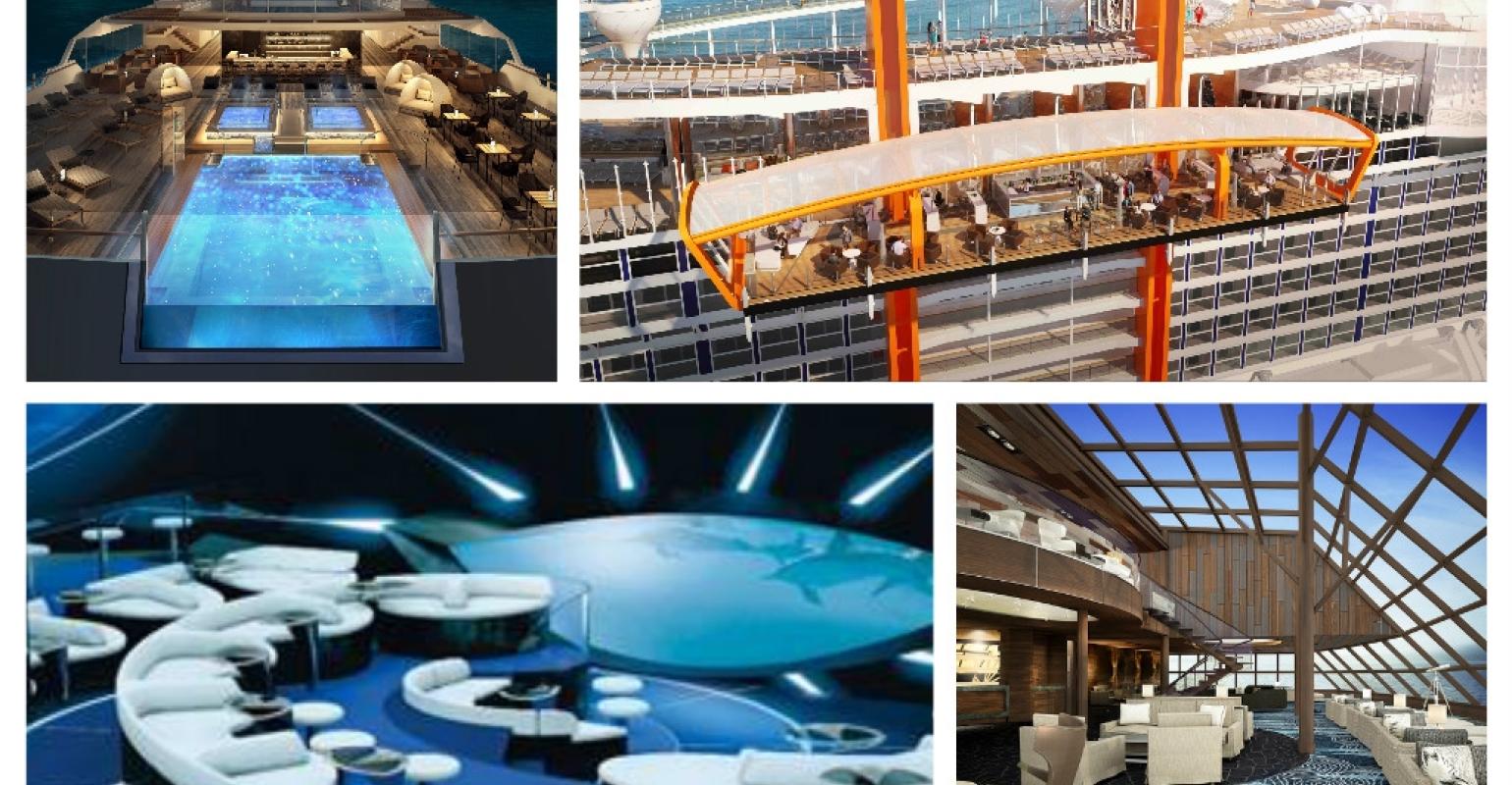 They'll add 34,395 lower berths to global capacity and loads of novel features—from a magic carpet, racetrack and underwater viewing lounge to full LNG propulsion and the ability to operate for stints on battery power.

These newbuilds are packed with plenty of cutting-edge characteristics. They include environmental advances like the world's first fully LNG-powered cruise vessel (AIDAnova) and an expedition ship (Roald Amundsen) that can sail for short periods on energy from silent, emissions-free fuel cells.

Speaking of expedition cruising, no fewer than five of the vessels are designed for this, with ice-strengthened hulls and novel elements like an underwater viewing lounge (Blue Eye on Ponant's Le Laperouse and Le Champlain), helicopters and submarines (Scenic Eclipse), underwater drones (Roald Amundsen) and other high-tech gadgets.

While the expedition ships are at the smaller end of the size range, the year's smallest new ship is a sail-cruise vessel, Flying Clipper, at 8,770gt. It's a replica of 1912's France II, the largest square-rigged tall ship ever built. Smallest in terms of double occupancy capacity are Ponant's pair of 184-berth ships.

Also coming in 2018 is a new world's largest cruise ship, Symphony of the Seas, at 230,000gt and 5,497 lower berths. It will be the first Oasis-class ship to sail from PortMiami, resident at Royal Caribbean's new Terminal A. Some fresh features include a two-level Ultimate Family Suite with a slide and a balcony climbing experience, a reimagined Boardwalk with a massive sports bar/arcade, a redesigned Solarium containing a seafood spot and the world's largest laser tag arena.

Next biggest is the 180,000gt AIDAnova, in a size leap for the German operator (its current largest ships are just under 126,000gt). After that, size wise, comes Norwegian Bliss, measuring 167,800gt. It's the third in NCL's Breakaway Plus class and builds on China ship Norwegian Joy's features, including a racetrack (enlarged), The Haven Observation Lounge, an open-air laser tag course plus a new Texas smokehouse. The ship will debut in Alaska as the largest passenger vessel ever to operate there.

Another large entrant, the 154,000gt MSC Seaview, is the sister of the just-introduced MSC Seaside and will be first of its class to sail in Europe.

One of the year's most anticipated ships is surely the 117,000gt Celebrity Edge, with a completely new design, fully created in 3-D. Novelities include the Magic Carpet platform cantilevered from the side of the ship, rooms with infinite verandas, designer suites and a Rooftop Garden with fantasy trees and soaring cabanas. Celebrity's first new ship design since 2008's Celebrity Solstice, Edge will debut with cruises from the customized Terminal 25 at Port Everglades.

Mein Schiff 1, meanwhile, is 20 meters longer than its fleetmates, with space for 180 additional accommodations. It's the fifth ship built by Meyer Turku for TUI Cruises. (Originally designated as Mein Schiff 7, it's supplanting the Mein Schiff 1 that's exiting to Marella Cruises.)

The year's new tonnage will serve primary markets including North America, Germany and France. Unlike in 2017, though, none of the newbuilds is tailored for China.

A diversification of builders characterizes the year. Fincantieri's Italian yards continue to lead the world in number of cruise ships churned out annually, with five in 2018. Plus, the two Ponant ships are emerging from Fincantieri's Vard, a new entrant in the cruise arena, with their hulls produced at Vard in Tulcea, Romania, and completion set for Vard in Norway.

Moreover, Fincantieri is now an owner of STX France, where two of 2018's ships will emerge. Meyer Werft in Papenburg is building two, as well, and Meyer Turku one. Croatian yards Brodosplit and Uljanik are also emerging in the cruise sector, along with Portugal's WestSea Viana Shipyard. Norway's Kleven Verft continues its line of ships for Hurtigruten, however with a completely new design.

(In addition to these ocean-going additions, new coastal vessels this year include Lindblad Expeditions' National Geographic Venture, from Nichols Brothers near Seattle and the sister of 2017's National Geographic Quest, and American Cruise Lines' American Constitution, from Chesapeake Shipbuilding in Salisbury, Maryland.)

While 2018 is a big year for new ships, even more are coming in 2019, when 22 ocean-going newbuilds are scheduled for delivery.