Age of Discovery, a new cocktail created by Cunard, The Savoy and Jack Daniel’s 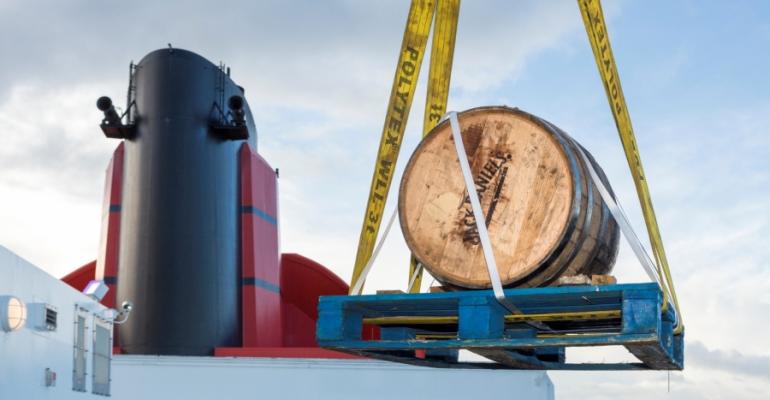 The cocktail will mature in a hand chosen 300 litre, Jack Daniel’s barrel on board Queen Mary 2

Cunard, The Savoy and Jack Daniel’s have collaborated together to create Age of Discovery – a barrel aged, limited edition cocktail.

The cocktail will mature in a hand chosen 300 litre, Jack Daniel’s barrel on board Queen Mary 2 during her 41,000 nautical mile, four-month world voyage - which departed from Southampton yesterday, January 10, 2016.

Age of Discovery has been formulated by the team at the world-famous Savoy’s Beaufort Bar.  Inspired and influenced by the tastes and aromas of the continents it will visit, from Europe to Asia, Africa, the Americas and Oceania, the Jack Daniel’s cocktail was mixed at The Savoy before the barrel sealed and bonded for its world voyage.

The cocktail’s home for the voyage was chosen by The Savoy’s assistant food and beverage director, Daniel Baernreuther at the Jack Daniel’s distillery in Lynchburg, Tennessee.

During her four month circumnavigation, Queen Mary 2 will visit 39 ports of call in 27 countries.  The oak barrel will be secured in open deck space for the duration of the voyage to expose it to the varied elements and climates that will influence the final result.

Neil Donachie from the Beaufort Bar says, 'The Jack Daniels and Bacardi represent the discovery of the Americas, while the Dubonnet is there as a symbol of Cunard’s royal associations. The spice-infused Madeira, used to sweeten the cocktail, is synonymous with the famous spice trail and oceanic expeditions.'

Nidal Ramini, head of advocacy at Jack Daniel’s added, 'We have a great partnership with The Savoy and they’ve been hand-selecting their own Jack Daniel’s Single Barrel for five years. It’s great to take this partnership to another level and be involved with Age of Discovery. As the only whiskey company in the world to make our own barrels, the idea of a barrel aged cocktail, containing the very whiskey that Daniel choose when we went to Tennessee together, travelling the world, was music to our ears. We can’t wait to see and taste the outcome, and see how the special Jack Daniel’s cocktail reacts to the elements.'

Angus Struthers, Cunard director, commented, 'Cunard and The Savoy are world-renowned brands famed for their luxury and levels of service as well as the experience each is able to offers its guests. We are delighted to be able to create Age of Discovery during Queen Mary 2's 2016 world voyage and to be able to offer our guests on the voyage the opportunity to try the non-aged version of this very special cocktail on board.