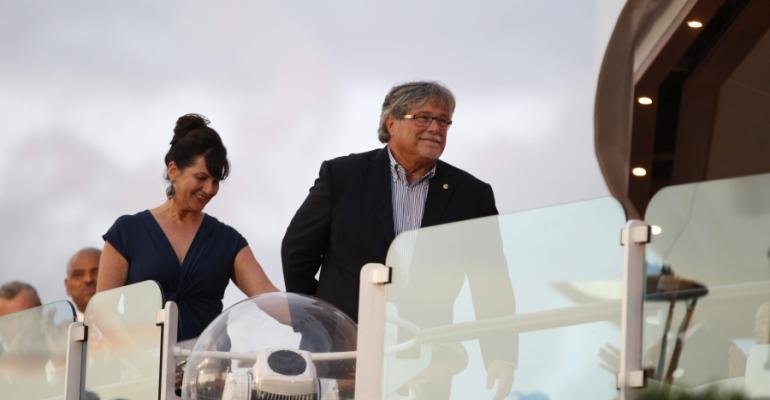 Micky Arison delved into China, how Arnold Donald is 'seeding the company with great new talent,' the search for a successor to Gerry Cahill and his own focus on next-generation newbuilds and why they will keep getting bigger. He spoke with Seatrade Insider in a wide-ranging interview aboard the new Regal Princess.

The Carnival chairman rarely talks to reporters since handing the chief executive reins to Donald—he doesn't miss the media. He views his job now as 'to make sure Arnold is successful.' That means being an adviser in areas like shipbuilding, helping vet new blood and 'staying away when appropriate.'

Arison admitted he's been going through withdrawal from the day-to-day management responsibility he once relished. 'But it's OK,' he said. Donald has his full confidence as a 'very high-energy guy who brings a totally different style. The company is in a state of significant change. Change is good.'

Carnival is 42 years old, so most everyone from the early days is gone or retiring. Arison said he was in charge for 'a long time, maybe too long.' It's time for 'young blood.'

Donald brings a new approach and new ideas. For example, 'To seed the company with some great new talent,' he's hired 'a handful of people you don't necessarily have spots for. It's an interesting approach,' as Arison put it. He's interviewed candidates for both the corporation and its operating companies without knowing their intended jobs.

A recent coup was Disney veteran John Padgett, whose title is 'global experience and innovation lead' or, as he's known in Carnival, chief customer experience officer.

Arison is delighted Carnival is luring Disney veterans—Padgett, he noted, came up with the MagicBand, a wristband that uses radio frequency technology and serves as a theme park ticket, hotel room key and payment mechanism.

With chief HR officer Jerry Montgomery, another former Disney man, Donald is leading the search for a successor to Carnival Cruise Lines president and ceo Cahill and has seen a number of candidates. Cahill's replacement may well be someone new to cruising, Arison said, but people in the business are applying.

He feels indebted to Cahill, 'a brilliant guy and a relentless hard worker. When I chose him [as Carnival president], I knew he would bring a different approach ... He did a great job.'

Cahill sometimes was unpopular since he 'wouldn't pander to the trade. But he understood the importance of the trade,' Arison said. He tried to talk Cahill out of retiring and succeeded once, 'but Gerry always said he wanted to retire at 60, so we were lucky to get three extra years.'

As for one of Arison's focuses—newbuilding—he's working on both series ships and next-generation concepts. A third 143,000gt vessel for Princess in 2017 was ordered over the summer, and the date to pick up the option for a Seabourn newbuild at Fincantieri comes due soon.

'There is still a little juice in the present ships and designs. And no question we're working on potential [new platforms] that are larger,' Arison said, adding that the brands' managements are more involved than ever in future designs.

Directionally, Costa Diadema gives an indication. 'The ship is fantastic ... the best Joe [Farcus] has ever done,' with lots of space, new features and specialty restaurants in a different general arrangement.

If anything has surprised Arison about cruising's development, it's the continued building of large ships.

'We got sidetracked by the two setbacks [Costa Concordia's fatal grounding and the Carnival Triumph fire] at a time when our competitors were bringing in very large, very fuel-efficient ships, so we got caught a little behind,' he said.

'What drives the size is fuel efficiency. You need 4,000 passengers on a ship to spread the costs.' So in a big ship, a huge amount of space becomes available for new products and services, and each brand decides what to do—'create a theme park,' as Arison put it, or more facilities and restaurants. The new Regal Princess may be the same size as Voyager of the Seas but it has no ice rink or rock wall.

Now 'You don't think of the size,' the Carnival chief said. 'My concern is that the infrastructure around the world has not adjusted. Not a lot of ports can handle large ships.' And everyone, from Norwegian to MSC Cruises, is building them.

The latest generation Love Boat design originated with Meyer Werft, which had proposed a sky-diving attraction. As Arison told it, Princess evp fleet operations Rai Caluori got the idea to test a sky-diving simulator on Princess Cays, and Princess passengers weren't interested. It turned out Carnival went with Fincantieri for the Royal Princess prototype, and the sky-diving simulator was taken out of the design—only to appear now on Quantum of the Seas.

Carnival's recent memorandum of understanding with China State Shipbuilding Corp. to explore a possible joint venture that may include developing a Chinese national brand grew from talks with officials about port matters.

If China goes ahead with a cruise newbuild, they will need a lot of assistance, Arison said, explaining Fincantieri's potential involvement and pointing out it is a global company with holdings in many countries.

'It's starting. That will help get barriers down. There is plenty of room for continued development through Carnival and Royal Caribbean,' Arison said.

Corporate chief operations officer Alan Buckelew was deployed to Shanghai 'to build strong personal relationships, which are very important in China,' he added.