Australia moves up to No. 3 source market for Cunard 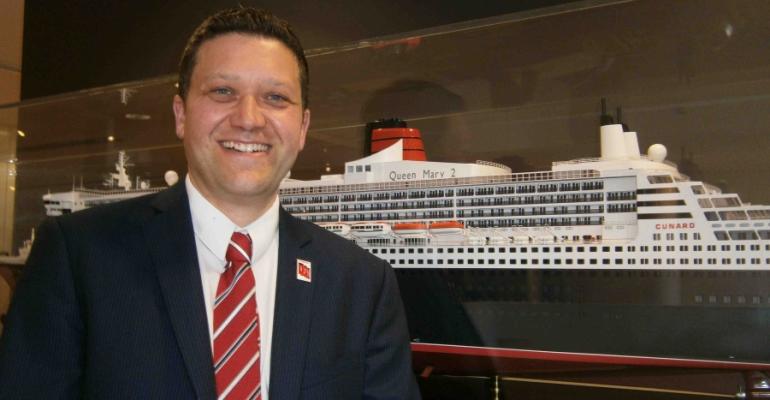 When Cunard's marketing director, Angus Struthers, was in Sydney a year ago he said Australia was the fourth most important market worldwide for Cunard and was fast catching up with third place Germany, after the UK and North America.
During a news conference at Carnival Australia’s headquarters in Sydney Wednesday Struthers revealed Australia has overtaken Germany.
To illustrate the growing Australian market, he said 800 of Queen Mary 2’s 2,600 passengers will be Australians when the flagship makes the  anniversary Atlantic crossing in July, following the same route as Britannia’s first crossing 175 years ago.
He also confirmed Australia is behind the UK in providing passengers for Cunard’s world cruises.
Struthers is on a whirlwind trip to Sydney for the historic meeting of Queen Victoria and Queen Mary 2 and the launch of a photographic exhibition celebrating Cunard’s 175th anniversary.
Queen Victoria arrived in Sydney this morning and Queen Mary 2 arrives tomorrow.
Thursday will be the first time the two Queens have met in Sydney Harbour.
There will be a spectacular send-off for Queen Mary 2 at 9 p.m. Thursday with fireworks lighting up the harbour when she sails past Queen Victoria, anchored at Athol Buoy, on her way to circumnavigate New Zealand for the second time.
Queen Victoria will depart at 11 p.m. en route to Akaroa on her 103-night world cruise.
The OneSevenFive photo exhibition on the boardwalk at the Sydney Opera House has been put together by Sydney photographer James Morgan who has photographed Queen Mary 2, Queen Victoria and Queen Elizabeth around the globe.
It features 70 images on two-metre high panels and provides an insight into life on board the Queens.
The public exhibition will remain in place for 175 hours.
It will go on display again in Liverpool, Cunard’s home for 127 years, where the company’s three Queens will meet on May 25.
Copyright © 2022. All rights reserved. Seatrade, a trading name of Informa Markets (UK) Limited.
TAGS: cruise lines source markets
0 comments
Hide comments
Related