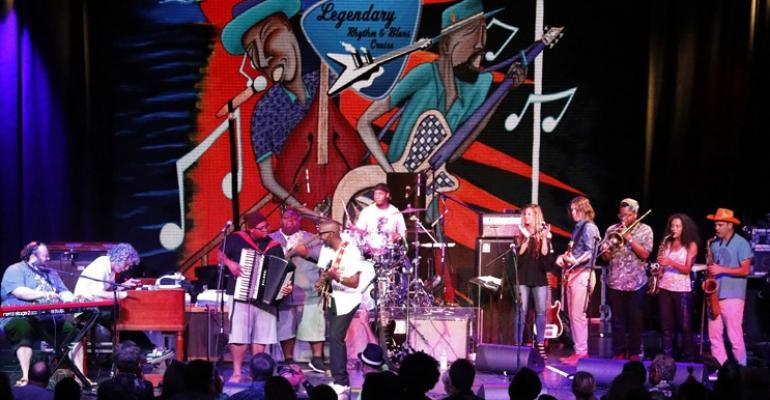 At ports on the Legendary Rhythm & Blues Cruise, all the music is free to the public and underwritten by the LRBC as a gift to hurricane-impacted islanders
The sold-out Legendary Rhythm & Blues Cruise sets sail Sunday for three Caribbean islands that were hit hard by hurricanes. Twenty-five blues bands will perform for a charter of Holland America Line's Koningsdam, sailing from Port Everglades to Grand Turk, San Juan and Tortola.

'The islands are resourceful in recovery, and the magical thing about the Blues Cruise is we combine a seven-day and night blues music festival with these wonderful paradise islands,' said Roger Naber, CEO of the Legendary Rhythm & Blues Cruise (LRBC). All the music is free to the public and underwritten by the LRBC, which is giving the gift of music to the islanders.

The charter was arranged by Worldwide Cruise Associates in Plantation, Florida.

'The charterer is a longtime client of ours with over 25 charters and most of them in the Caribbean. We both agreed if at all possible we need to sail on this itinerary as originally planned to support the islands, particularly Tortola and San Juan,' said Steve Bloss, president of sales, Worldwide Cruise Associates.

LRBC fans and the performing artists were very supportive, Bloss said, adding that Tortola and Romasco Group, the port agent, were particularly helpful in making arrangements.

Grand Turk is nearly totally recovered. Naber said Grand Turk Cruise Center's Margaritaville is a popular spot to set up a band for a poolside concert, where beach-goers and ocean swimmers can also hear much of the music. Scheduled to perform is the critically acclaimed blues guitarist Marquise Knox, who will play free for the Koningsdam passengers and those from another ship that will be in port the same day.

At San Juan, the logistics didn’t work out to have a multi-band event in Old San Juan, but LRBC plans to donate at least $10,000 to the nonprofit Second Harvest Food Bank. Naber is still researching a local venue to host the band Commander Cody, an act on the ship. Puerto Rico, he noted, remains challenged with a reported 40% of the island still without electricity and safe drinking water.

Tortola in the British Virgin Islands is in major recovery mode. LRBC passengers from British Columbia have raised $15,000 to rebuild a school and community center in Cane Garden Bay, on the opposite side of the island from the cruise facility at Road Town.

Scheduled to perform at the Tortola Pier Park cruise facility are the Ils Sont Partis zydeco band, formerly the band with legend Buckwheat Zydeco, and Deanna Bogart. In the past LRBC has held performances at Cane Garden Bay, however the roads are not yet back to their pre-storm state.