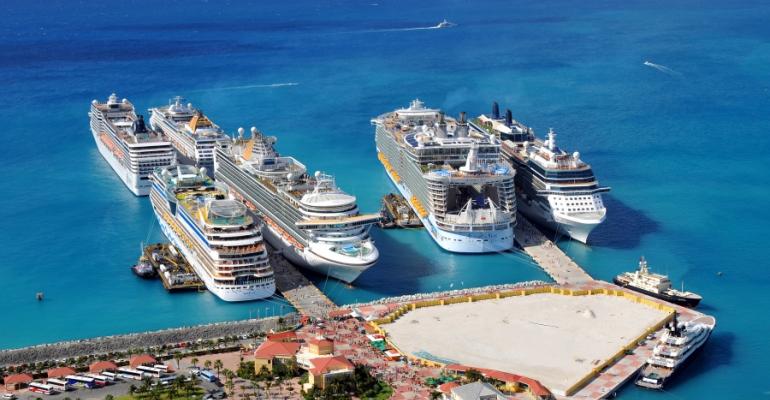 FCCA conference will take place in a purpose-built conference structure at the busy St. Maarten port

Keeping the world's No. 1 cruise region fresh amid rising global competition, Mexico's turnaround, how to craft and sustain successful tours, and the roles of the public and private sector and cruise lines in port development are among key issues for the Florida-Caribbean Cruise Association's conference and trade show in October.

In taking its 21st annual event to St. Maarten, the FCCA is returning to a destination that's seen as a model cruise industry partner.

'St. Maarten is really listening and delivering ... All of us in the cruise industry salute St. Maarten,' FCCA president Michele Paige said, citing the consistent government support, private sector involvement, and responsiveness and consistency in costs and delivery.

The Oct. 6-10 conference is expected to be one of the best-attended in FCCA history thanks to interest in the destination and the ease of accessing St. Maarten from throughout the Caribbean, according to FCCA svp Adam Ceserano. In addition to approximately 100 cruise executives, 30 to 35 of the region's ministers and top-level government officials—'all important to the cruise industry'—are expected, Ceserano said.

Notably, more senior Mexican officials are to attend this year.

'Mexico is a very important country for us, with 19 ports and almost six million cruise passengers,' Paige said, adding that Mexico is undergoing a revival from a cruise perspective.

After pockets of crime that were highly publicized, turning off tourists and, subsequently, cruise demand, fights over a cruise head tax and the 2009 H1N1 virus outbreak, Mexico has gone through some tough years.

From all of this, Paige said, 'came leadership that really brought Mexico into a much better light ... and leaders who put the "wow" back in their product. Mexico had become tired—tacos, tequila and mariachis—and it has so much more.'

She said the federal government, the states and local officials are working together and implementing many projects to expand Mexico's tourism product. A workshop at the FCCA conference will focus on how Mexico tackled the negatives as an example for other destinations facing challenges. (Mexico's Quintana Roo will host the 2015 FCCA conference and trade show.)

In a year when cruise lines are struggling to improve Caribbean pricing and the global competition for ships, particularly in Asia, intensifies, another event focus will be the need for the Caribbean to stay competitive.

'The issue remains the same: we need to put the "wow" back in the Caribbean. As more and more ships go global, as more destinations open up, we need to make a statement of why we are different and to create more consumer demand,' Paige stressed.

'Just because ships have always come doesn't mean they will always come. It's important to keep the product fresh. We're catering to consumers who can choose to go anywhere,' she added.

The event also features a cruise line ceo round table, to be moderated by Paige, and conference opening remarks by FCCA chairman Kevin Sheehan, president and ceo of Norwegian Cruise Line. The keynote speaker is to be announced.

Meetings, workshops, the trade show and registration will all take place in a purpose-built conference structure at the Port of St. Maarten.

'We are honored and excited to again host the FCCA Conference & Trade Show,' Mark Mingo, ceo of the St. Maarten Harbour Group, said earlier this year. He added that in 2003, St. Maarten 'saw the benefits for all involved' of hosting the conference, and he championed the FCCA's return this year.

Paige recounted how, back when St. Maarten was drawing fewer than half a million passengers a year, officials asked what the cruise industry needed to grow. 'They followed our blueprint to a T,' she said. In 2014, St. Maarten is expected to handle 523 calls and 1.67m passengers, according to data from 11 of the FCCA's 15 member lines, making it among the Caribbean's busiest cruise ports.

Confirmed trade show pavilions so far are St. Maarten, Dominican Republic, Puerto Rico, Mexico, Colombia and US Virgin Islands, with others pending. New this year, cruise executives will preview the trade show to meet exhibitors before the grand opening. The trade show will also offer a business center with free Internet access and a nearby coffee bar.

The social program kicks off Oct. 6 at the Westin Dawn Beach Resort & Spa, the official conference hotel, with a 'White Party' theme. There will be food and an open bar, as always, but the gathering will be more casual than in the past so participants can go on to other venues or after-parties, or remain at the Westin throughout the evening, as they wish.

Oct. 7 is the welcome party following the conference opening ceremony, Oct. 8 offers a Night Extravaganza in the trade show including a table tennis challenge, and the conference closing party is the night of Oct. 9.

The more relaxed opening evening format, greater prominence for the trade show including the cruise executive preview, and the workshop topics are among a number of changes in response to feedback, Paige pointed out.

Terri Cannici, vp operations for FCCA, urged attendees to register now to secure their desired one-on-one appointments and rooms at the official conference hotel, where space is filling fast. Plus, she noted, the conference rate goes up at the end of August.