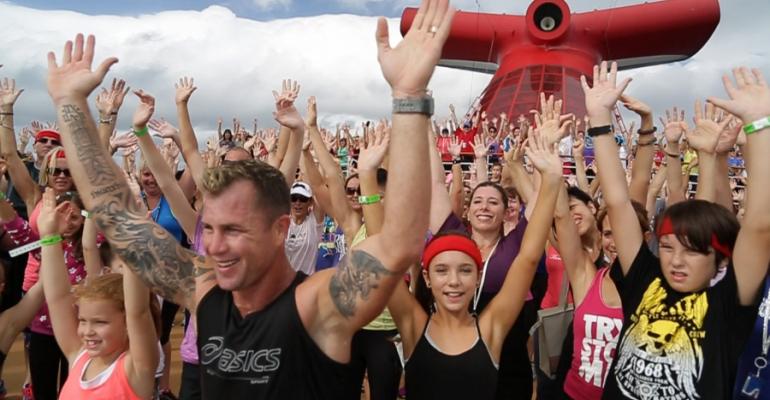 Passengers aboard Carnival Cruise Line’s two ships in Australia will be put through their paces again this year when fitness guru Shannan Ponton returns with his Biggest Boot Camp at Sea.
Ponton, a personal trainer on the Australian version of 'The Biggest Loser,' will be on board resident ship Carnival Spirit during a nine-night cruise to New Caledonia departing Sydney on July 8.
He will also join Carnival Legend during her second season in Australia when she sails from Sydney on an eight-night cruise to New Caledonia on November 4.
Both ships have a two-deck fitness centre, a sports court and an outdoor jogging track.
Last year’s high-intensity boot camps were a great success and Ponton, who accompanied passengers during morning walks around the deck, raised money with gold coin donations for his chosen charity, CanTeen, which provides support for young people living with cancer.
‘To see well over 500 people of all sizes, ages and abilities having an absolute blast on the top deck of Carnival Spirit blew me away,’ he said. ‘The energy, fun and passion [were] contagious and this year I am keen to smash the record and get even more passengers involved.
‘It is going to be great for anyone who feels like they have fallen into a rut, had trouble sticking to eating and training plans or those who just need to reboot and fire up.
‘There will even be a few hilarious stories and secrets from my career on 'The Biggest Loser'—off the record, of course.’
Copyright © 2022. All rights reserved. Seatrade, a trading name of Informa Markets (UK) Limited.
TAGS: people cruise lines ships
0 comments
Hide comments
Related