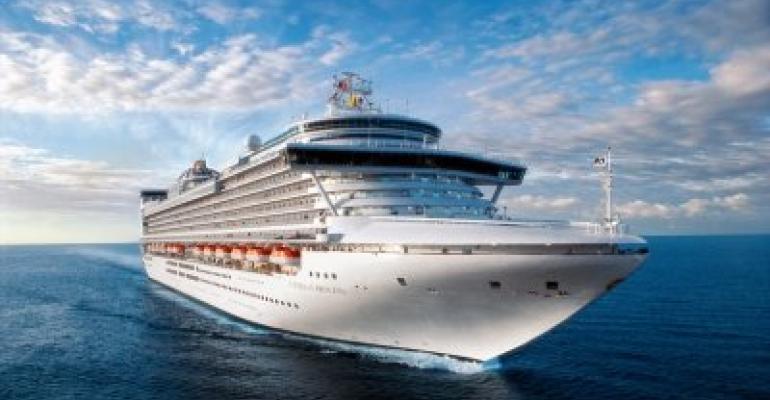 The court-appointed monitor said Carnival Corp. has a 'blame culture,' exhibited in the response to the crimes that occurred on Caribbean Princess, pictured here, as well as in the response to incidents that have been reported since then. Carnival called these 'unacceptable failures' and said it is working to 'make sure we are in full compliance moving forward'

Carnival Corp. reported the issues cited in the court monitor's report to authorities and/or in internal records.

The incidents related to malfunctions or failure to use exhaust gas cleaning systems (scrubbers) in designated Emission Control Areas, discharges from lifeboat and tender systems, failures/malfunctions of oil content meters associated with oily water separators or white boxes, and inaccurate or incomplete recordkeeping of the oil record book.

Further incidents related to failures or malfunctions of oily water separators or white boxes, and incomplete recordkeeping or document maintenance involving the garbage record book or other logs required by the court-ordered environmental compliance plan (ECP), MARPOL or other laws and regulations.

Other incidents pertained to refrigerant gas leaks, seals and locks, inadequate or missed training and prohibited discharges or emissions that appear attributable to voyage planning, such as inaccurate boundary maps or miscommunication between the bridge and engine room.

These incidents came to light since US District Judge Patricia Seitz made public a previously confidential report on Carnival Corp.'s first year of probation, as first reported by The Miami Herald.

Incidents outlined in the 205-page report included more than 30 violations related to scrubbers, most arising from unexpected shutdowns. For example, Carnival Ecstasy experienced multiple scrubber shutdowns in May, July and October 2017 due to equipment malfunctions. This resulted in the ship burning heavy fuel oil in Emission Control Areas without an exhaust gas clearing system online.

More than 45 incidents pertained to inaccurate or incomplete oil record books, while more than 70 incidents related to failures or malfunctions of oily water separators and white boxes or their component parts.

For instance, from Aug. 8-13, 2017, an oily water separator on Carnival Imagination was taken out of service due to a malfunctioning unit. During this six-day period, the ship was unable to process oily wastewater. On Dec. 27, 2017, both of Carnival Victory's oily water separators were taken out of service due to issues with their oil content meters (a cracked glass cell and a blocked water sample line). The ship did not have any spare oil content meters so a third-party manufacturer’s technician visited the ship the following day to complete repairs.

Some incidents involved entire record books going missing. On 28, 2017, Carnival Breeze reported six oil record books were missing in violation of MARPOL and company procedures. 'A subsequent search was unsuccessful and it is believed that the [oil record books] may have been removed during a past audit/inspection but not returned,' a Carnival report stated.

More than 55 incidents related to voyage planning involved prohibited discharges or emissions that appear to be attributable to misunderstandings or miscommunications about the ship’s location or relevant environmental requirements. For example, between June 4-16, 2017, Carnival Elation discharged approximately 1,270 cubic meters of treated sewage and 22 cubic meters of food waste in Bahamian Archipelagic waters in violation of MARPOL and company requirements.

On June 15, 2017, Carnival Conquest, Carnival Liberty, Carnival Magic and Carnival Vista made prohibited discharges of sewage and food waste in Bahamian Archipelagic waters. According to the company, the cause of these events 'appears to be associated with the interpretation of [the relevant company] procedure.'

On Nov. 27, 2017, Carnival Vista discharged cleaning chemicals into Bahamian Archipelagic waters in violation of company requirements 'due to a misinterpretation of territorial waters.'

Maritime New Zealand filed criminal charges against Princess Cruises for two alleged violations of New Zealand’s Maritime Transport Act 1994 in connection with a fatal accident on board Emerald Princess while docked in Port Chalmers in February 2017. A high-pressure nitrogen cylinder burst while being re-pressurized, which resulted in the death of a crew member. A New Zealand investigation found that the burst nitrogen cylinder had suffered significant corrosion at the point of failure.

Progress and substantial implementation of the ECP

The court-appointed monitor noted progress by Carnival Corp. The company did not repeat any of the offenses that led to its pollution charges, and it substantially implemented the court-ordered ECP, including discharge sampling and personnel training, the appointment of qualified dedicated compliance managers and the cooperation of employees shipboard and shoreside.

'... Vessels’ officers and other crew have been cooperative and helpful,' the monitor reported, adding that 'Meetings with shipboard employees—from the captain, chief engineer and head of hotel to the engine room ratings and cabin stewards—demonstrated employee awareness of the ECP and the ship’s environmental obligations.'

However, the monitor said Carnival Corp.'s complex structure and lack of centralization 'impede efforts toward continuous improvement.' As well, the company 'appears to have a blame culture, with a focus on identifying errors and disciplining individuals rather than also evaluating systemic issues that may need to be addressed. This blame culture was exhibited in the response to the crimes that occurred on the Caribbean Princess, as well as in the response to incidents that have been reported since then.'

The monitor also called Carnival Corp.'s internal investigations 'critically flawed. There is no consistent, reliable means to investigate incidents or near misses and identify root causes that can lead to meaningful corrective actions.'

Noting that the incidents cited were part of its self-reporting efforts during the first year under the ECP, Carnival on Wednesday said in a statement: 'These issues were unacceptable failures in our processes that were not in accordance with our policies and procedures, and do not reflect the culture we have built at Carnival Corporation and across our nine cruise line brands.'

The company added that it cooperated with the ECP on board and ashore, corrected conditions that led to the original charges and 'expended considerable efforts to meet the [probationary] Year One requirements, and has substantially complied with them.' Training initiatives were praised in the report, too.

'We have been taking steps to address the improvement areas mentioned in the report, and to build on the positive progress noted by the court-appointed monitor to make sure we are in full compliance moving forward,' Carnival Corp. said.

The company added that its self-reporting mechanisms are an 'important component of our continuous improvement process. We are striving to build a culture of not just compliance, but commitment to environmental excellence across our brands as we work openly to identify improvements in our operations where needed to ensure full and total compliance going forward.

'Based on the latest report, we are currently working with authorities under the ECP to identify specific areas to support continued improvement in our compliance. We also look forward to announcing several new initiatives designed to improve our fleet operations, ensure compliance and continue our efforts to be best-in-class with respect to environmental responsibility.'

At a court conference to discuss ECP issues last week, Judge Seitz scolded Carnival Corp. Chairman Micky Arison and CEO Arnold Donald, neither present, and requested their presence at a June hearing. The judge also threatened to temporarily block the company's ships from docking at US ports.