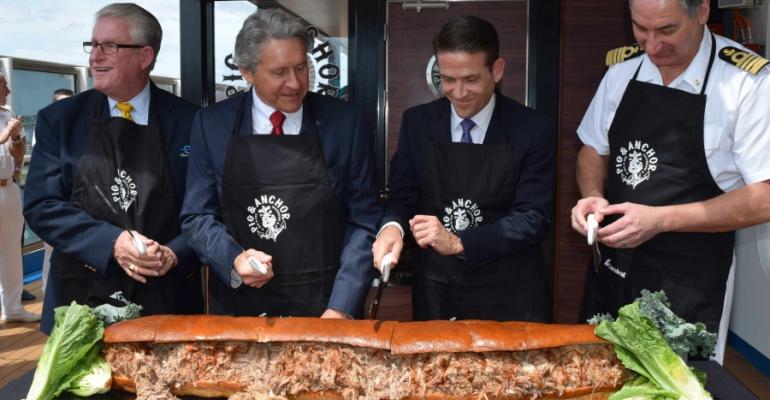 The invitation-only event was highlighted by the carving of a massive, six-foot-long pulled pork sandwich by officials from Carnival and the port to commemorate the debut of Fieri’s new barbecue venue which was installed during a multi-million-dollar dry dock last month.

Carnival Magic is joining Carnival Victory and Carnival Valor on year-round departures from Canaveral, as well as the Carnival Sunshine which operates seasonal sailings.

Together, these four ships will carry more than 650,000 guests annually from Port Canaveral on over 200 three- to eight-day cruises a year.

'Port Canaveral is one of our most popular and fastest-growing homeports and we now have four exceptional ships based there offering our most highly-rated guest features, a huge array of staterooms and suites with private balconies and a wide variety of itinerary choices,' said Christine Duffy, president of Carnival Cruise Line.

'For 20-plus years, Carnival Cruise Line has sailed from Central Florida’s port, providing their guests with an enjoyable Fun Ship experience,' Murray said.