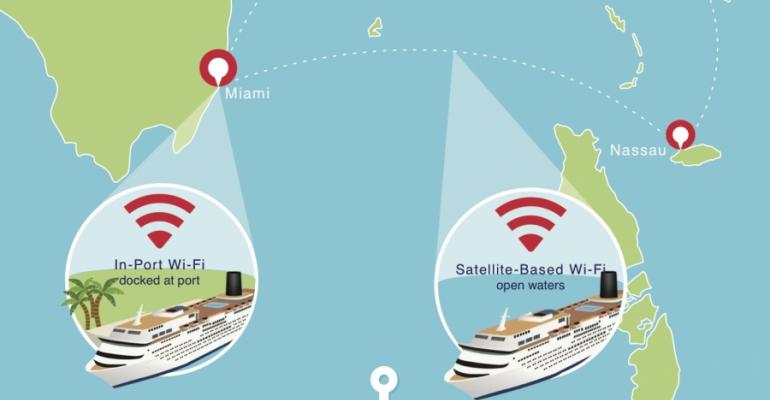 Carnival Corp. & plc has forged an innovative hybrid wireless network that can speed Internet connectivity 10 times above current levels. Now available on about 10 vessels, the technology will be rolled out to all 101 ships across Carnival's nine brands in a hefty $10m investment.

[email protected] integrates land-based antennas installed along cruise routes, Wi-Fi from a port connection and advanced satellites, forming a network Carnival said is a first in the cruise industry on this scale.

The network will seamlessly switch among its various technology solutions to give passengers and crew the highest available bandwidth and signal strength. Similar to a mobile phone changing from one data connection to another while moving across a coverage area, the [email protected] toggle between networks will be transparent for travelers and managed behind the scenes by a high-tech system.

This will improve passenger satisfaction and help crew members keep in touch with friends and family, while also—Carnival hopes—attracting new cruisers, especially the must-stay-connected millennials. Plus, it will enable a wide range of new services via mobile applications.

Millan didn't give specific speeds because he said that depends on the ship. But in each case, the improvement has been 10-fold, and guest satisfaction scores have shot up 50% among past passengers while ratings from new cruisers are very good.

[email protected] was first tested on Carnival Imagination 1.5 years ago, and fine-tuned until improving to a level where the company added Carnival Inspiration. Both ships sail from Long Beach, Calif., to Mexico. The system will be on Regal Princess starting this week for its Caribbean debut—which right off the bat should boost media coverage and social media communication of the ship's naming by the original 'Love Boat' cast.

[email protected] is currently on about 10 vessels of Carnival Cruise Lines, Holland America Line and Princess Cruises that operate from southern California and in the Caribbean.

The immediate focus is rolling out the service to more Caribbean ships this season, then expanding to Alaska for summer 2015, followed by the Mediterranean, Baltic, Western Europe and Asia. Carnival hopes to have all its cruise regions covered in 2016.

[email protected] involves a number of suppliers including MTN, Harris CapRock and Cisco, plus, in port or close to shore, additional vendors to provide the antennas and the Wi-Fi and to amplify the signal. Each ship must be equipped with the dishes and antennas to receive satellite C-band and Ku-band frequencies, long-range Wi-Fi and Wi-Fi.

The beauty of Carnival's technology is that each vessel switches seamlessly to the optimal system at the time. The algorithm looks for capacity, speed and what happens to other ships when a particular connection is selected.

'It's a holistic approach,' Millan said.

Plus, since technologies are evolving rapidly, Carnival has opted to use a variety of providers instead of banking on a single solution. Milan said the model can be adapted for future technologies.

'As technology changes, we can change how our network operates,' he explained. 'So it is very possible that one of the technologies we are using today in our network may be replaced by a newer, better technology a few months from now.'

Carnival isn't currently working with O3b Networks, Royal Caribbean Cruises Ltd.'s partner, but Millan said the system could incorporate O3b technology in regions where that would be the best solution.

Currently O3b has geographic limitations due to the number of satellites in orbit. Millan said Carnival wanted to come up with a solution for its entire 101-ship fleet.

Carnival's news is another dramatic development in shipboard connectivity, following the O3b solution for Royal Caribbean, which that company is calling 'transformative.'

The Royal Caribbean fleet earlier changed out its legacy system, which had a download speed of 4 megabits per second, to Harris CapRock's system offering a five-times-faster 22 Mbps. O3b Networks will multiply that many times over to a lightning-fast 500 Mbps, Royal Caribbean chairman Richard Fain has said. Now it's on just a few ships, and due to the satellites' orbits, the service is optimized in the Caribbean.

Pricing and packaging will be up to each Carnival brand.

Improved broadband will facilitate new services via apps for smartphones and other mobile devices, Millan added. Some are in place, such as the ability for Princess passengers to access on-board activities via their devices, and chat and text using an internal foundation network. Other examples are Costa and AIDA working on luggage management and embarkation services.