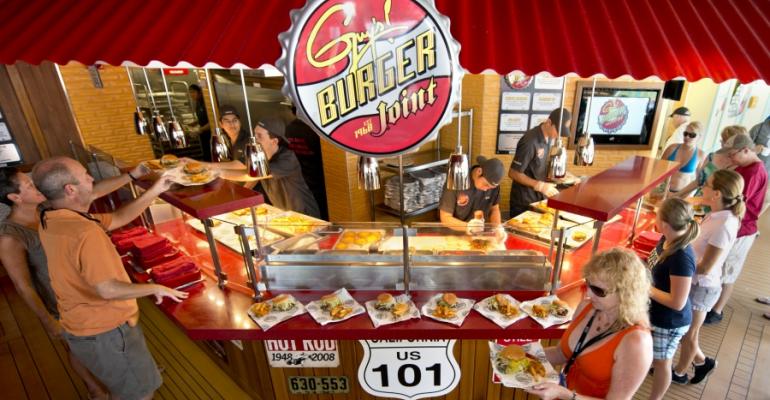 Guy's Burger Joint one of several eateries added to Carnival Valor
In preparation for its new year-round program of three- and four-day voyages from Port Canaveral kicking off this year, Carnival Valor has undergone an extensive renovation that added a variety of popular dining and bar concepts.

The new spaces were added during a dry dock that began April 23 and ran through May 8, 2016.

Carnival Valor is one of four ships that sail from Port Canaveral which is also home to Carnival Magic and Carnival Victory offering year-round departures, as well as Carnival Sunshine operating seasonal sailings.  Together, these four ships will carry more than 650,000 guests a year.

Carnival Valor kicks off its year-round three- and four-day Bahamas cruise schedule from Port Canaveral on Oct. 30, 2016.  On this route, three-day cruises depart Thursdays and call at Nassau while four-day voyages depart Sundays and feature Nassau and Freeport.

Carnival Valor will also offer a series of three- to five-day cruises this month as well as a program of five- and eight-day departures through October 2016.  The three- to five-day sailings will take place throughout May, visiting popular ports like Grand Turk, Amber Cove, Half Moon Cay, Nassau and Freeport. The ship will also offer a one-time six-day cruise departing May 15 featuring Nassau, Amber Cove and Grand Turk.