Concordia is floating, exit from Giglio set for July 21 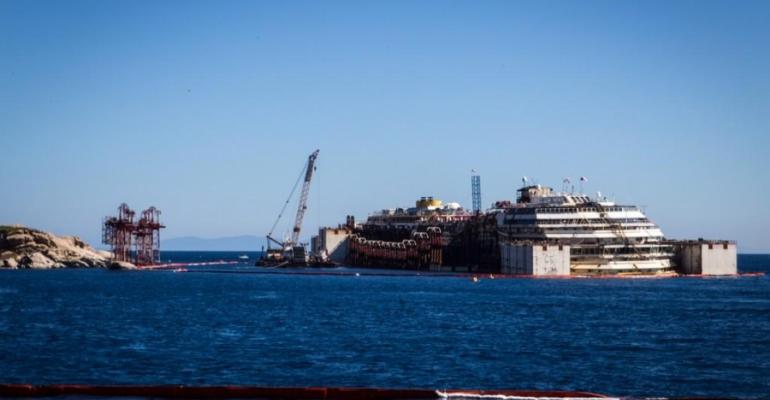 Update summarizes the first full day of the refloating. Concordia refloating operations started in Giglio early Monday morning, as planned. The wreck is now floating, thanks to air being pumped into the sponsons attached to its sides, forcing out the water. The stern and bow are currently 2.2 meters above the platform where the ship has been resting, and the wreck has been towed 30 meters away from the island, completing the first day's objective.

The ship has been securely moored in its new location, where technicians will complete the attachment and tensioning of the last cables and chains, and lower the starboard sponsons to their final position.

In coming days, Concordia will be raised one deck at a time, from Deck 6 to Deck 3. The entire operation is expected to take six or seven days, with the removal from Giglio currently scheduled for July 21.

At 6 a.m. Monday senior salvage master Nick Sloane and the rest of the team reached the operations center located on the vessel. A ferry arrived in position at 8:30 a.m., signaling the final phase of the lightening of the wreck had begun. Fewer then 1,000 tonnes of weight remain out of the initial 30,000 tonnes.

As soon as the lightening step was completed, the wreck began to be lifted off the platforms as compressed air forced the water out of the sponsons, initially in the stern area, first by one meter and then to the desired two meter level. After that, tugs positioned the vessel in its new eastward location.

Shipbuilder Fincantieri has been praised for the design and robustness of the ship's structure. There has been no torsion or flex. This is also the result of the careful planning and execution of the parbuckling.

According to the Monitoring Observatory, the pollution monitoring shows no major risks, and the water analyses have been in line with projections.

On Saturday, the Monitoring Observatory approved documentation for the refloat.

'Everything is in place and ready, the salvage team has successfully completed the technical tests and if weather and sea conditions will remain favourable the refloating operation will commence as planned on Monday morning,' Thamm said.

'It is a complex operation never attempted before, but we know we can count on the best technicians in the world. I wish them all the best for the success of this great challenge,' he added.

The wreck is due to depart July 21 under tow to Genoa for breaking.