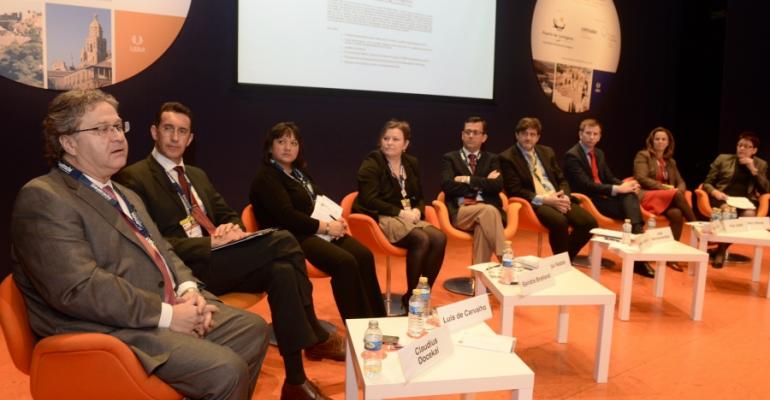 Cooperation and communication were key themes during the port and destination session at the Seatrade Winter Cruising Forum in Cartagena yesterday, as industry stakeholders discussed the development of winter cruise offerings.

Luis de Carvalho, managing partner at Bermello Ajamil & Partners Europe opened with a look at the busiest winter ports, showing the Canary Islands as the most popular destination from MedCruise and Canary Island statistics. The Canaries had 373 calls in winter 2012/13 and 578,932 passengers, more than double the figures of second place Civitavecchia.

Within the Atlantic corridor, ports from Italy’s West Coast, through the Mediterranean Sea and down to the Cape Verde islands, Carvalho identified a number of different seasonal trends, depending largely on their weather and distance from source markets.

Cruises in the Atlantic islands and touching Portuguese ports boast a total of 3.1m passengers from 1,941 calls in 2014. For the Canary Islands, peaks were in the winter season, the Balearics saw peaks in repositioning months in spring and autumn and the French Rivera peaked during the summer months.

‘There is an opportunity to go some way in flattening seasonality,’ said de Carvalho, identifying natural linkages from the Western Med down the Atlantic Corridor.

Such itinerary diversification would require cooperation between destinations to avoid duplication and repetition of offerings in a particular region, he stated, adding that in some regions a rebranding might be necessary to promote the attractions on offer outside of the hot sunshine months.

Despite Azamara only having two ships, it fits in calls to 28 Spanish ports in its itineraries.

‘What have you done and what can you do to sell the Med to cruise lines in the winter?’ was Docekal’s question to delegates in the audience representing destinations. For Azamara, diverse passengers onboard necessitate diversity of shore offerings.

He particularly emphasised the need to differentiate between ship sizes and cruise brands, targeting the demographics aboard and offering something for everyone.

‘There is no one size fits all, particularly for smaller ships.  List activities for the winter months, so we can see what will be available at each call.’

Docekal also identified that winter cruisers travel at a reasonable rate, so lower port costs and head taxes help to attract lines in the winter months when their margins are tight. There remains a limit to how far Azamara can stretch its season in the Med however, he remarked, as guest satisfaction drops off around the core winter months as the weather becomes cooler.

Thomson Cruises experiences the same shift in passenger attitudes, according to port & shore excursion operations manager, Jacqui Nobile. Budget-conscious customers in the winter view shore excursions as optional extras, which places even more importance on the price point of such activities.

One obvious consideration for any line is whether a town will be open for business when the ship arrives. ‘Seasonality is an issue as many areas of Greece, Turkey and Italy are closed in winter,’ Nobile said, ‘creating a chicken and egg situation. Do we send our ships and hope that the attractions and shops are open, or do we wait until the attractions are open year-round before we send the ship?’

Javier Sanchez, director, Agencia Maritima Blazquez Cruises was proud to discuss the facilities and services Cartagena lays on for visiting ships, as a result of discussions with cruise lines, local authorities and even the navy. Cartagena’s 500mtr berth is due to be expanded to 700mtr, and fees and head taxes for calling in the city are the lowest permitted under Spanish law, the port agent said.

Cruise ships have full priority in the port, but if the cruise berth is unavailable ships are able to use the container terminal or a third berth usually occupied by the Navy. Should the ships have to call at either of these backup locations, the city will lay on coaches to shuttle passengers to the city centre free of charge.

‘How can we tell the cruise companies what we want from them without offending them?’ was the opening question of Jose Sennacheribbo, tour and ground operations manager at BC Agency. Reiterating the theme of cooperation, he suggested that lines be more adventurous with their tour programmes, combining shorex and onboard lectures into multi-day events across multiple ports.

Sennacheribbo also called for some understanding and assistance from the cruise lines as to the difficulties faced on land, including in securing sufficient insurance coverage for passengers, particularly those from the United States.

Sandra Bratland, managing director of Cruise Norway was consistently praised by fellow panellists and audience members for the united front presented to cruise lines when Norway first started marketing itself as a winter cruising destination in 2008.

By identifying the range of attractions available for cruise passengers throughout the winter, and the best month for each activity across a number of ports, Cruise Norway puts forward a complete marketing package to the lines that made their decision making much more straight forward.

Saga Cruises sent the first ship on a winter itinerary to Northern Norway in 2009, an area that is now firmly established as a winter destination for a number of ex-UK brands with German lines’ interest also showing growth.

Most sailings are in February and March with Northern Lights and snow-related activities as the main draws with high yields reported for both local businesses and cruise lines, and consistently high passenger satisfaction. This winter, there are 13 cruises to the region, including 22 overnight stays, according to Bratland.

For those ports looking for full calendar year cruise calls, a number of the speakers suggested taking small steps towards achieving this by initially stretching the season at both ends.

New in 2016/17 AIDA will operate weekly round trip cruises year round from Hamburg sailing west and south to North European cities with AIDAprima.

Speaking from the floor, Claus Bødker, director Cruise Baltic called on lines to consider itineraries featuring Baltic capital cities also in the winter and said he saw no reason why the Baltic season should not start a couple of weeks earlier and finish a couple of weeks later, stretching from beginning of April to end October.