On Costa Concordia anniversary, a day of remembrance 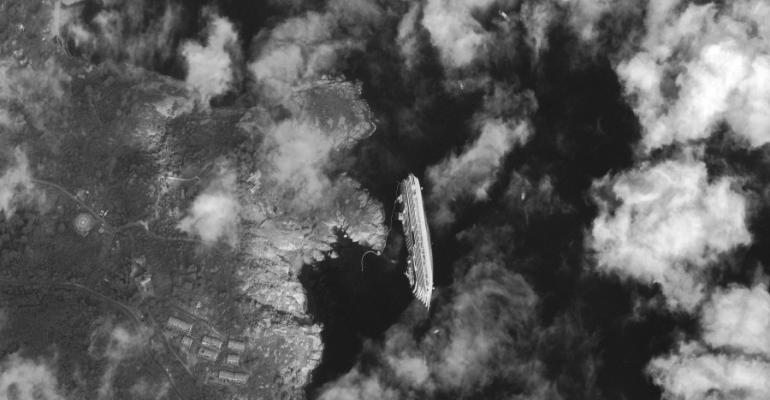 Costa Concordia - as seen from above. DigitalGlobe satellite image on Jan. 17, 2012, four days after the capsize

Sunday will be a day of remembrance in Giglio for the 32 people who died when Costa Concordia hit the rocks one year earlier, on Jan. 13.

Twenty-seven passengers and five crew members lost their lives. The bodies of two of people, a passenger and a crew member, have not been recovered.

The commemoration is dedicated to the victims and their survivors, and will acknowledge the rescue workers who assisted throughout the tragedy.

The municipality of Giglio, with Costa Crociere’s support, has planned a program including Mass, the laying of plaques and a classical concert. Costa, the city council and the local community will honor the rescue organizations.

In a statement, Costa expressed ‘the sincerest compassion for the suffering’ experienced, and for ‘the grief of the families of those who are no longer with us.’

On Sunday morning in Giglio, a chunk of the huge rock that breached Costa Concordia’s hull will be returned to the sea, with the victims’ names inscribed on a plaque. Mass will be celebrated by the Archbishop of Sovana, Pitigliano e Orbetello. In the afternoon, a bronze plaque commemorating the victims and a plaque expressing solidarity with the community will be laid.

An evening classical music concert conducted by Maestro Massimiliano Caldi is scheduled for the Church of St. Peter in Giglio Castello.

Flags will be flown at half-mast on Sunday in Costa offices worldwide, and on all the ships. Mass will be held in the ships’ theaters, with a moment of silence at the end of the service.

In Genoa, Costa employees will attend a commemorative Mass. Out of respect for the different religions of its employees, there also will be Hindu ceremonies in Mumbai and Bali, a Muslim ceremony in Jakarta, a Buddhist ceremony in Shanghai and Catholic masses in Goa, Jakarta, Manila and Lima.