Costa Concordia - what happens next 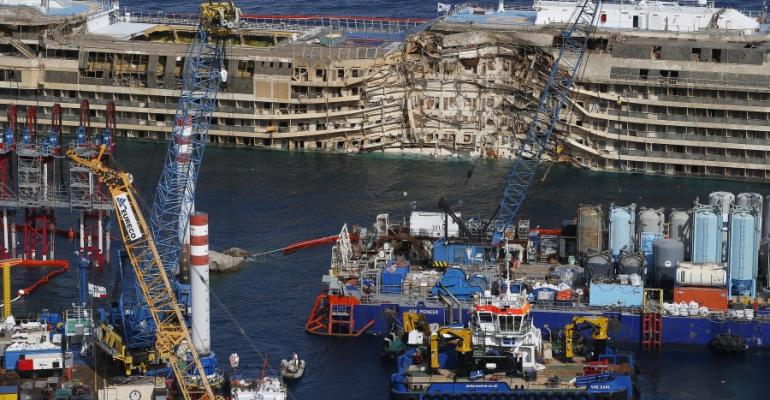 Now that Costa Concordia is upright after a stunning, 19-hour operation that went off virtually without a hitch, the work wages on.

The wreck will have to be stabilized, patched and refloated before being towed away for breaking at a mainland port sometime in the spring, at the earliest.

Assessments of the starboard side of the wreck—which was lodged underwater against the rocks off Giglio Island—are under way, and operations to reinforce the hull have begun. After the assessments, decisions will be taken about the repairs, and about the removal of potential pollutants like cleaning products and lubricants.

Emergency commissioner Franco Gabrielli of Italy's Civil Protection Authority told media there appeared to be no leaking of dangerous substances.

As soon as the ship is deemed safe to enter, the first priority is understood to be searching for the bodies of the two people that were never recovered after the ship grounded and sank on Jan. 13, 2012. Of the 32 people who died, the remains of Sicilian passenger Maria Grazia Trecarichi and Indian crewman Russel Rebello have not been recovered.

Authorities will also examine the wreck for further forensic clues in the Costa Concordia criminal case.

After this and the technical assessment, the repair plan will be implemented. Then comes the refloating. In addition to the 11 sponsons attached to the port side that were filled with water to help right the wreck, another 15 sponsons, already built by Fincantieri, will be transported to Giglio and fixed to the starboard side.

By means of a pneumatic system, the sponsons attached to both sides will be gradually emptied of water, providing the buoyancy for flotation. When this operation is completed, an approximately 18-meter portion of the hull will remain submerged.

Currently the wreck is sitting lower in the water, on giant steel platforms atop thick pillars drilled into the granite seabed.

After the ship and its support structures are removed, the restoration of the seabed will get under way. That and environmental monitoring are expected to stretch another five years.

In all, Costa Concordia is an unprecedented salvage operation with a cost expected to top €600m.

The parbuckling by the Titan-Micoperi consortium was hailed as a great success. The remote-controlled work by a team under the command of Capt. Nick Sloane, the senior salvage master, began at around 9 a.m. Monday, and Costa Concordia was upright at 4 a.m. Tuesday.

Costa Crociere project manager Franco Porcellacchia, who called this an 'extraordinary operation' due to the vessel's size—it stretches 951 feet/290 meters, deemed the parbuckling 'a perfect operation.'