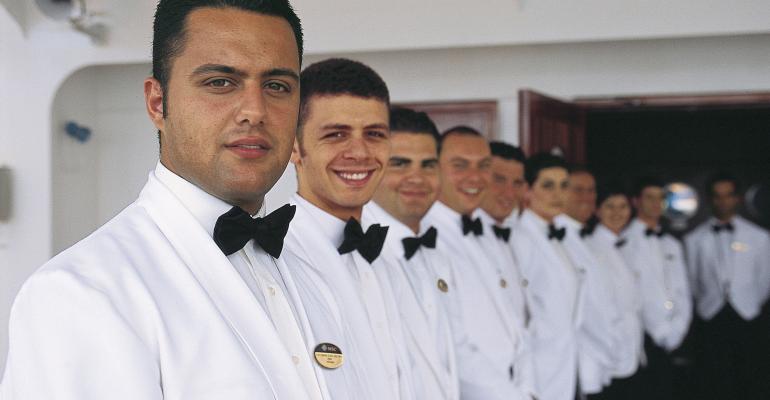 MSC's Nico Corbjin said that numbers of crew also needed to take into account turnover of 15 – 20% a year
With some 113 newbuildings on order cruise lines will face a major challenge in the next few year to find all the crew required both for hotel staff and maritime deck and engine positions.

As a rough rule of thumb of 1,000 crew per ship (a 225,000gt cruise ship like Oasis of the Seas carries a crew complement of over 2,000 whereas a 30,000gt vessel the crew would be more in the region of 380) current orderbook equates to a demand for an additional 113,000 staff, both hotel and maritime, on board cruise ships. The figures presented by Seatrade at the CruiseConnect Summit in Manila earlier this week proved to be a talking point.

While companies such as Royal Caribbean Cruises source half of its crew from three markets diversity will be a major factor going forward to meet demand both in numbers and the type of service passengers want.

Artur Pankowski, avp general manager for RCL Regional Operating Headquarters said that 25% of its crew come from the Philippines, and 12.5% each respectively from Indonesia and India. However, in total the company has crew from 100 nationalities.

Speaking at a panel session, Simon Frank, director crew operations, East for V.Group said: ‘The key is to be diverse and explore more and find unexploited markets.’

Speakers believed that in numerical terms enough crew could be found for hotel positions, however, quality and retention would be an issue.

Tino Hensel, vice president marine HR for Carnival Maritime said he thought the additional crew required was manageable in terms of numbers, however, retention was an issue given living and working conditions.

Staff on board cruise ships face limited cabin space, limited access to communications and leisure, as well as sometimes having to work seven days a week. ‘This generation are not willing to seek a career under such conditions,’ Hensel said.

He said there were ‘adventure seekers’ in the younger generation who do such ship board jobs for one or two years, but that ‘we struggle with turnover’.

Speaking on Tuesday Nico Corbjin, vice president of crew management for MSC said that numbers of crew also needed to take into account turnover of 15 – 20% a year in crew, and that with this requirements in the coming years could be a figure of 500,000.

MSC Cruises sees a need for 75,000 crew in coming years

For MSC Cruises which has 14 newbuildings planned Corbjin sees a requirement of 75,000 crew for his company alone in coming years. ‘I don’t see we will have a problem filling rank and file entry positions,’ he said. New areas such as themed restaurants mean expertise has to be sourced from other industries as well.

For the maritime positions planning is even more crucial with it taking around nine years to train a seafarer up to senior officer levels – an issue that faces the shipping industry as whole.

According to Hansel deck and officer crew account for 10 –15% of the compliment equating to a demand for around 9,000 seafarers over the next 6 – 7 years. ‘You really have to start that now,’ he said.

The question was if the industry was ready for this especially given new factors such as LNG-fuelled vessels which require additional training. “This is the challenge ahead of us.”

With the move towards expedition ships with voyages in areas such as the Arctic new skill sets are also required. Eric Visser, director seagoing workforce management at Holland America Group, shared it has two vessels on order that will feature submarines and as yet it did not know what qualifications the crew for these vessels would require.