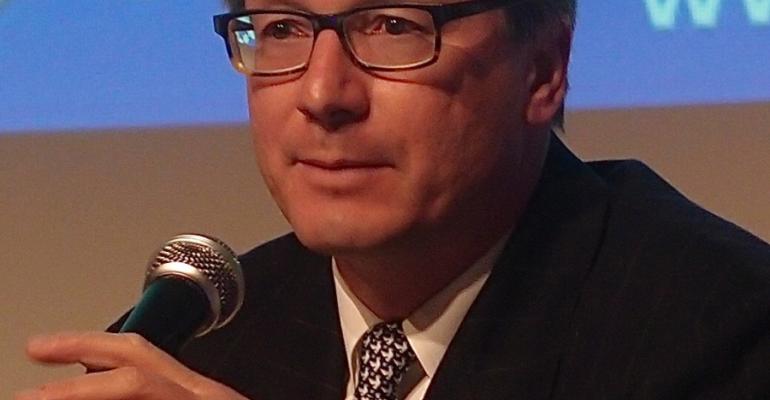 Tercek - In view of changing management structures, job descriptions and personnel at the major companies, ports shouldn't take for granted they have a long-term relationship with cruise lines (file photo)

More than 100 participants at Cruise Europe's 2014 conference, held in the Baltic port of Riga Wednesday, heard cruise line executives and guest speakers shoot from the hip, telling ports and destinations how it is and what they need to do to gain more business.

First up: John Tercek, vp commercial development at Royal  Caribbean Cruises Ltd., who spoke of changing management structures, personnel and job descriptions at the three big corporate cruise entities—Royal, Carnival and Norwegian—and stressed the need for ports to be proactive in communications.

'Don't take for granted you have a long-term relationship with a cruise line,' he stated.

In a wide-ranging presentation that Tercek stressed reflected his own views and covering the profitability of the major players, source market development, newbuild financing and ship deployment, he listed nine emerging markets including China, India, Malaysia, Japan, Brazil and Russia: 'If all achieved only a 0.5% penetration, collectively this group would account for 16.5m new cruisers,' he said.

Poacher turned gamekeeper Tom Spina, director of port finance & analysis at Norwegian Cruise Line who less than nine months ago was in charge of New York City's cruise operations, told the audience the traditional 'milk-run' of Baltic capitals 'has been delivering the same product for the past seven years and we are getting little repeat business as there is no interest in coming back.'

As a result, Norwegian is introducing some ex-Copenhagen cruises to Norway to 'try something different.'

As the fleet grows, Spina added, there may be possibilities, including new homeports, to attract more Norwegian ships into North Europe in the next three to five years 'but it's important we grow and improve the shorex products together.'

On a more sobering subject, John Richardson, special adviser, FIPRA International, honed in on political crises around the world and the long-term economic impact on the cruise industry. He called the Ukrainian unrest 'a goodbye to Black Sea cruising for the time being' and, as a knock on, the Eastern Mediterranean is unlikely to see normal trends in itinerary planning in the near future.

And it's not just hitting deployment, he claimed—Russia's potential as an emerging passenger source market has now been pushed back. 'After months of negotiations between the EU and Russia to facilitate tourist visas for Russians visiting Europe, all discussions have now stopped,' Richardson said.

On a more positive note, with lines looking to put ships in areas considered low risk, Europe may benefit from more deployment. However, with that comes other issues, he warned, related to congestion at marquee ports and, landside, at popular tourist attractions.

Talking about Disney Cruise Line's strategy for North Europe, marine operations manager Steve Masters spoke of the brand's return to the Baltic in 2015 after a five-year lapse and its first calls to Iceland and Norway. Disney will sail eight cruises next summer including five from Copenhagen. Masters said the 11-night Copenhagen itinerary calling at Norway and Iceland and finishing in Dover is doing 'very well' with 92% of capacity sold and the entire North European programme is 'well ahead of where we wanted to be on sales' this far out.

He did not discount a return to the region in 2016, though that is not confirmed yet.

Silversea Cruises' director of shoreside services, Mary Shaw Delaney, gave a vote of confidence to Northern Europe, calling it an excellent region with 'tons of high-quality ports all within close proximity.' She also had praise for Cruise Europe and its role in promoting the region's marquee ports and lesser-known ones to the cruise lines. Membership now numbers 115 ports.

Returning to how the ports can help lines by bringing more variety and interesting opportunities to land programmes, Shirley Henderson, manager of shore excursions at Carnival UK, said planning for 2016 is under way and called on the destinations to 'tell us what is happening ... be it food and wine festivals, market days, dance events, music festivals, carnivals and parades and any new ports.' She added: 'You know your locale better than we do so keep us informed.'