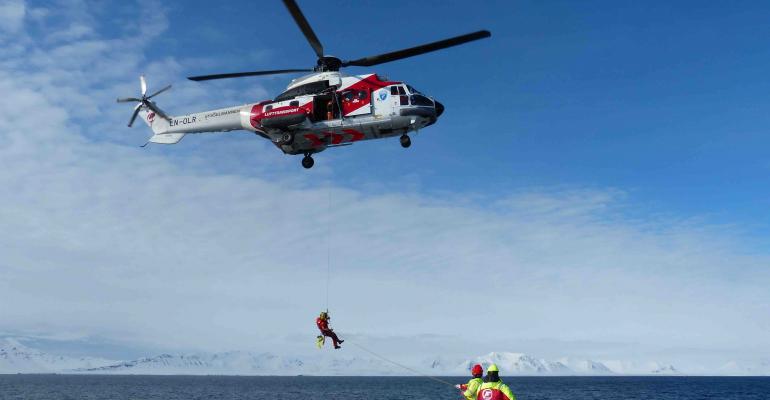 An Arctic search and rescue operation

The Association of Arctic Expedition Cruise Operators' just-published report on their most recent search and rescue tabletop exercise said cruise ships can make valuable contributions to search and rescue (SAR) in the Arctic. To achieve this, dialogue between the cruise industry and SAR responders is essential.

What happens when a cruise ship experiences an engine room fire and loses propulsion some hundred nautical miles west of the Arctic island of Jan Mayen? This is the scenario that participants of the 2018 Joint Arctic Search and Rescue Tabletop Exercise and Workshop where presented with when they gathered in Reykjavik April 10-11.

The event brought together representatives from the cruise industry, the Arctic SAR community and academia for the third year in a row. The exercise is organized by AECO, the Icelandic Coast Guard and the Joint Rescue Coordination Center North-Norway to increase dialogue between cruise operators and the Arctic preparedness and response sector.

The scenario, developed by the US Coast Guard, was designed to train participants for a situation where another cruise ship is the first to arrive on the scene. The participants had to consider whether this vessel of opportunity was ready and able to take on the role of on-scene coordinator. As responders deployed ships and aircraft to the scene, the cruise ship mobilized its crew and resources to assist the vessel in distress.

Frigg Jørgensen, executive director of AECO, said the exercise was a valuable opportunity to get a better understanding of the operations and reasoning of the different players involved in such a rescue.

Streamlining communications to relieve stress on the captain

'The participants got a chance to observe the discussions of the other groups and understand how they think and what their concerns are. For example, by listening to each other, all the groups realized that everyone wants to speak directly with the captain. As a result, the captain could end up spending a lot of time on communication during an emergency. One of the things we discussed is how communication can be streamlined to relieve some of the strain on the captain,' Jørgensen related.

The next Joint Arctic SAR workshop and Tabletop Exercise will take place April 9-10 in Reykjavik.