Crystal Morgan in Papeete: ‘Seabourn is perfect for this region’ 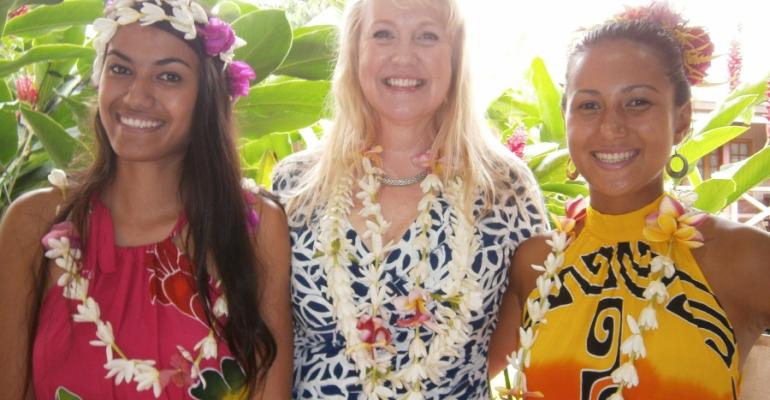 Crystal Morgan enjoyed the 'unique experience' of swimming with stingrays

Princess Cruises’ director deployment planning, Crystal Morgan, who was keynote speaker at the inaugural South Pacific Cruise Forum in Papeete October 16-17, said ‘Seabourn and its ships is perfect for this region.’

Morgan said boutique ships like the 450-passenger Seabourn Odyssey, which has an inbuilt marina ideal for Tahiti’s water sports, are able to sail to the smaller islands.

‘People are looking for unique experiences,’ she said.

Morgan, who went swimming with stingrays, said French Polynesia has an ideal mix of cultures and experiences, like scuba diving and snorkelling, windsurfing, historical and heritage tours and shopping, especially for the local black pearls.

On January 4 next year Seabourn Odyssey departs Los Angeles on a 22-day ‘Pacific Islands Odyssey 1’ voyage to Auckland that includes the French Polynesian ports of Nuku Hiva, Fakarava which will be developed to take the world’s biggest cruise ships, Rangiroa, Papeete, Moorea and Bora Bora.

Morgan was able to visit another boutique ship, the 30,277gt Pacific Princess which sailed from Papeete on October 18 on a 10-night roundtrip to Huahine, Rangiroa, Raiatea, Bora Bora and Moorea.  The 680-passenger ship repeats this itinerary again on October 28 and November 7.

Mick Fogg, manager marine and operations planning Asia Pacific for Ponant also said his company’s ships, that carry on average around 220 passengers, are perfect for the South Pacific.

‘They are top dollar ships, but alcohol and shorex are included,’ Fogg said.

‘We don’t need cruise terminals, buses and roads,’ he said. ‘We go straight to the destination and our Zodiacs can take us anywhere.’

Fogg revealed that in 2018 he has plans for his French company to operate voyages with L’Austral between the French territory of New Caledonia and French Polynesia.

‘I don’t want this to be a transit area,’ he said. ‘I want it to be a destination in itself.’

Michael Mihajlov, destination director for Carnival Australia, revealed there are plans to make Lautoka a hub.

‘Pacific islands and cruise are a match made in heaven.’