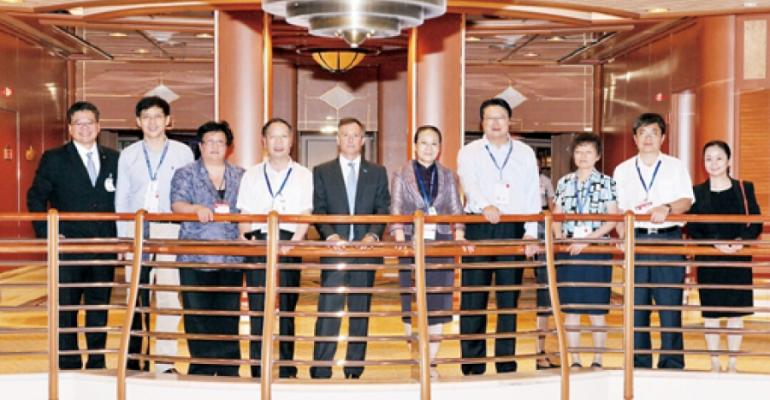 CSSC officials pictured during a tour of Sapphire Princess

Hu Wenming, president of CSSC, pointed out that the group has been building up its knowledge and skills on the construction and management of large cruise ships.

‘China’s market needs more than just one luxury cruise ship, and to successfully construct the first ship is of utmost importance,’ Hu highlighted, adding that the Asian cruise market is expanding, and China is the fastest growing market in the region.

By 2020, Chinese cruise travellers are projected to account for around 50% of global cruise travellers, making it more important for China to be able to build its own cruise ships, according to Hu.

The cruise ship construction plan by CSSC is supported by the country’s ministry of industry and information technology (MIIT) and the city government of Shanghai.

Su Bo, deputy minister of MIIT, has expressed optimism in the long term growth of China’s cruise market, and firmly supports the construction of cruise ships at CSSC.

In 2012, various reports emanating from China suggested that a cruise ship order was about to be signed.

That year, Australian mining magnate Clive Palmer released details on his plans to build a fleet of luxury liners, including a 21st century version of Titanic. Palmer confirmed he had signed a Memorandum of Understanding with state-owned Chinese company, CSC Jinling Shipyard, to build Titanic II, but Seatrade Insider understands no steel has been cut on this project yet.

In August 2012, another report suggested that construction of a large cruise ship carrying 2,000 passengers had started as part of a package of projects aimed at boosting Xiamen’s tourism and shipping industries.

International firms Deltamarin and PFJ Maritime Consulting, separately, confirmed to Seatrade Insider at the time they have been involved in discussions.

A year earlier Xiamen officials announced plans which included a 100,000gt cruise ship, a cruise terminal and shipping business centre in the city of Xiamen. The combined investment was put at around $2.63bn.