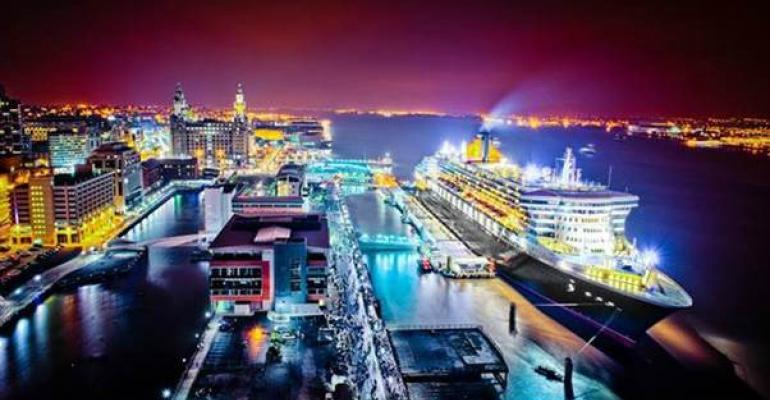 Cunard’s QM2 on a previous visit to Liverpool
Liverpool was scheduled to welcome the arrival of Cunard’s Queen Mary 2 Monday night for a visit until 8 p.m. Tuesday.

The 149,000gt vessel will be moored in front of the city’s World Heritage waterfront.

During the ship’s call to Liverpool 300 passengers will embark to sail across the Atlantic making calls to New York via Reykjavik and Halifax, Nova Scotia.

Liverpool Cruise Terminal is now half-way through its most successful season, with 86 cruise calls expected this year, bringing 165,000 passengers and crew members. The season is expected to boost the local economy by £12m.

Liverpool City Council is in the final stages of planning for a new cruise terminal, which will be able to accommodate the next generation of super cruise liners, despite concerns that were likely to delay the new terminal.

At this halfway point of the season, the terminal has so far received 37 cruise ships, 55,000 passengers and 25,000 crew members. There has been seven maiden calls and two new cruise lines will add the terminal to future itineraries.

Queen Mary 2 last visited Liverpool in 2015 when 800,000 people came to view the ship and her sister ships Queen Victoria and Queen Elizabeth for Cunard’s 175 anniversary celebrations.Since then QM2 has had a full re-fit with 10 dining venues on board, four swimming pools, a theatre and a planetarium.

Liverpool’s City council deputy mayor, Wendy Simon, sees the ship’s arrival as positive for Liverpool’s tourism: ‘Attracting liners of this calibre to Liverpool is really helping to cement our status as a global city and travel destination…We are all looking forward to the many more of the upcoming highlights of this year’s cruise season.’

Angus Struthers, vice president sales & marketing at Cunard focused on the ship’s long-standing history with the city: ‘Given our historic ties with the city, we are delighted to return to Liverpool, the spiritual home of Cunard. As with this special voyage, when the opportunity arises, we're always keen to tailor our itineraries to meet local desire for local departures, especially on the iconic trans-atlantic route sailing to New York.’

To celebrate the ship’s departure a quayside concert will feature local spoken word artist Lynsey Price, Liverpool’s own Town Crier and a programme of live entertainment. A confetti show will signal the ships departure at 8pm.