For Duffy, first year at Carnival marked by momentum, change 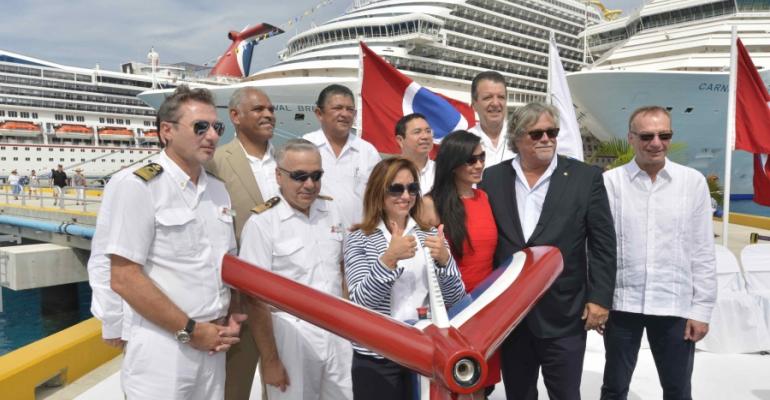 In the nearly a year since Christine Duffy signed on as Carnival Cruise Line president, there have been ample management changes and a shift from recovery mode to building momentum. Now, a new ship is coming—Carnival's first since 2012.

'We're moving past talking about recovery to the kinds of recognition and the financial results that give us strong momentum,' Duffy told Seatrade Cruise News.

So it's 'fantastic timing' to be introducing Carnival Vista in the spring. This is the first new Fun Ship since Carnival Breeze and a fresh platform with features like an IMAX theater, the SkyRide aerial cycling attraction, a brewery in the RedFrog Pub, the new Seafood Shack and Family Harbor and Havana Club accommodations.

Duffy said people are excited about the ship and 'there's pent-up demand from our guests for Europe,' where Carnival hasn't sailed in several years.

When she took over as president last February, the team had been buoyed by recognition as YouGov's most improved brand in consumer perception. That was a dramatic reversal following YouGov's polling after the Carnival Triumph fire and power loss in 2013, when Carnival registered one of the steepest drops in consumer perception since the twin crises of BP and Toyota in 2010.

These recognitions come after a 'very strong year' with several quarters of double-digit yield increases. Duffy credited the company's focus on culture, communication and engaging people for the improved results.

On the management front, there have been a lot of changes—part of a healthy transition when a new leader joins an organization, in Duffy's view.

She expressed satisfaction with Jim Heaney's appointment as cfo in June. Most recently with SeaWorld Entertainment, he earlier had a long stint at Disney Cruise Line. CFO Anne Bramman had left early last year for a cfo job in California, where she lived before joining Carnival.

In October Ron Phillips became svp human resources - Office of People and Potential, a new role combining the shipboard and shoreside HR functions. Phillips had been with the giant New York Presbyterian Hospital. He reports to Duffy, who said he's off to a positive start.

'A focus for me is our people and culture,' Duffy said, adding that Carnival has 37,000 employees shipboard and shoreside. When she started, she pledged to visit all 24 Fun Ships and by the end of this February, she'll have done that.

It has been energizing to get to know the team members, whose 'passion, dedication and tenure' have impressed Duffy.

Carnival is getting close to hiring a new chief marketing officer, too. CMO Jim Berra had decamped to Royal Caribbean International in June, following svp guest operations Mark Tamis, who left in February.

Carnival has been considering a number of candidates for the chief marketing role and 'may have something to announce soon but we're taking our time,' Duffy said. Meanwhile, Stephanie Evans Greene, vp marketing, fills in.

In other management changes, Ken Tate, vp revenue management, added responsibility for deployment and itinerary planning and moved up to svp, while his boss, Lynn Torrent, evp sales and guest services, expanded her role by taking on commercial operations. This includes Carnival's international business—with two ships designated for China, the vessels in Australia and the UK sales office.

Long-time company veteran Terry Thornton, who was svp fleet deployment and port operations, now reports to Torrent and is handling the Australia and China business, two burgeoning areas. Besides this, Thornton kept his responsibility for port operations. His new title is svp international.

In June 33-year Carnival stalwart Adolfo Pérez became vp trade sales and marketing, reporting to Torrent. 'Adolfo in that role is a home run,' Duffy said, recapping how he'd immediately stepped up the work already under way to rebuild trade relationships and trust in Carnival.

Scores continue to go up in trade surveys—further evidence of the momentum Duffy is pleased to report as she approaches her first anniversary.