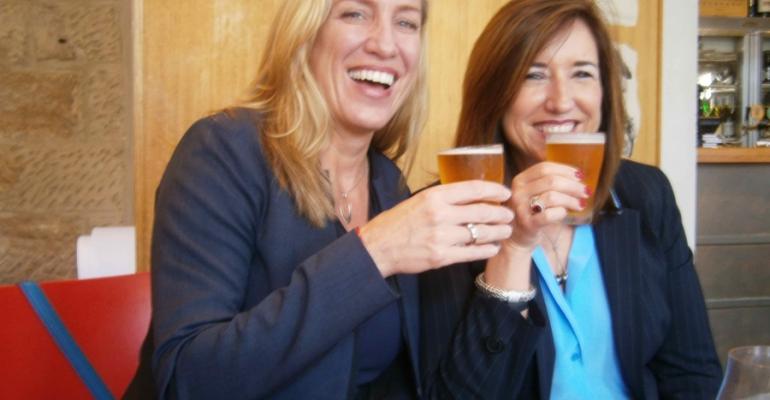 Christine Duffy said she is on the brink of completing visits to all 24 Carnival Cruise Line ships since being appointed president in February 2015. She spoke at a media reception at the Lord Nelson Hotel in The Rocks area of Sydney Thursday.
Duffy, previously president and ceo of Cruise Lines International Association for four years, arrived in Sydney on Tuesday for the first time in her new role and returns to Miami on Saturday.
She said she has yet to visit Carnival Liberty which she will do on Valentine’s Day weekend this month in San Juan.
In Sydney on Wednesday she toured Carnival Spirit and she will visit Carnival Legend before leaving for the airport.
The Lord Nelson, Sydney’s oldest continually licensed hotel, crafted the Thirsty Frog Summer Ale for Carnival Spirit, Carnival’s resident ship in Australia, in May 2014. It was also made exclusively available to Carnival Legend when she arrived on her inaugural extended season in September that year.
When Duffy tasted the bespoke cruise beer, which takes its name from Carnival’s RedFrog pubs, she declared it ‘very good.’
Despite industry rumours to the contrary, she said Carnival Legend will not become a second resident ship in Australia.
‘She is almost a resident now,’ she said, ‘spending seven months of the year in Australia before moving to Alaska.’
Copyright © 2023. All rights reserved. Seatrade, a trading name of Informa Markets (UK) Limited.
TAGS: people cruise lines ships
0 comments
Hide comments
Related