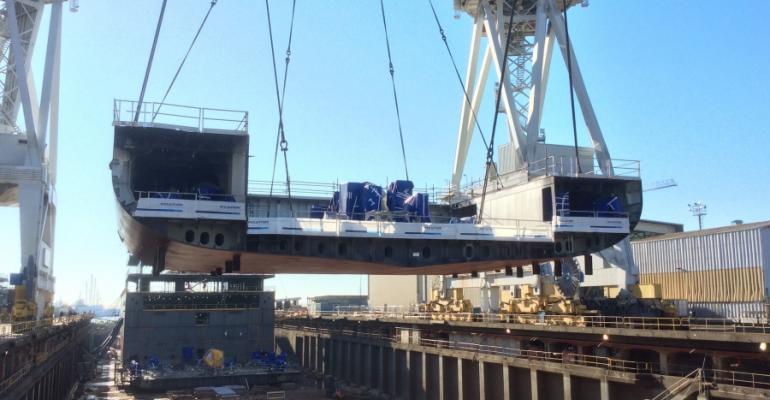 Eight coins—each representing one of the continents Silversea Cruises visits, plus a special commemorative coin—were welded into the keel of Silver Muse during its keel-laying ceremony Thursday.

'We proudly sail to all seven continents discovering new destinations and ports with our intimate, boutique vessels and we are now one step closer to introducing Silver Muse to the fleet,' Silversea ceo Enzo Visone said during the event at Fincantieri's Sestri Ponente shipyard.

The coins were a South African rand, Australian and Singaporean dollars, an Italian euro, a US half dollar, a Brazilian real, a commemorative Antarctic Heritage Trust coin and a Silver Muse commemorative coin.

Visone and shipyard director Raffaele Davassi welded the coins into the 450-ton block before it was lowered into the building dock.

'Silversea looks forward to working closely with Fincantieri throughout the construction phase of Silver Muse and in the run-up to its first cruise in spring 2017,' Visone added.

Silver Muse's 2,400-ton, 111-meter bow section was already in position in the building dock, having arrived at the Genoa facility from Fincantieri’s Castellammare di Stabia yard near Naples on Nov. 28.

The 40,700gt, all-suite ship can accommodate up to 596 passengers. RINA is the classification society.

Silver Muse is expected to be the first of three new vessels for Silversea, as Seatrade Cruise News has previously reported.

There are options for two ships that are still to be exercised, Visone confirmed.