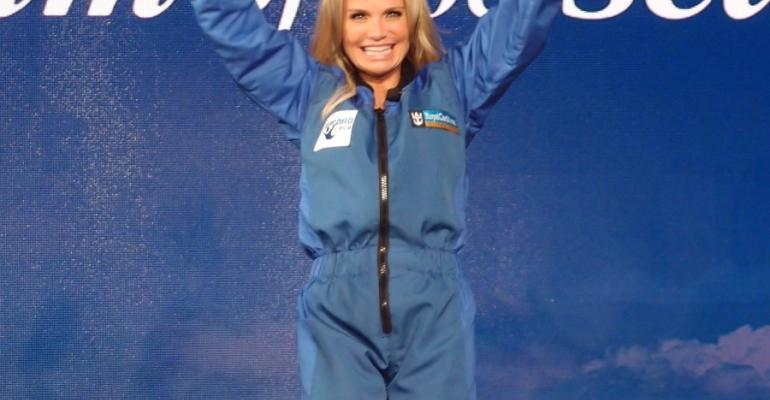 Performer Kristin Chenoweth, the godmother of Quantum of the Seas, is playing an expanded role as Quantum Experience Adviser for Entertainment and will be helping reveal entertainment options during a live Google Hangout next week.

Royal Caribbean International has hinted that the vast quantity of bandwidth expected to be available through its O3b Networks relationship will have new 'show-stopper' uses and that a secondary venue on Quantum of the Seas may have an up-charge for some entertainment.

Otherwise, the company has revealed a full-length production of 'Mamma Mia!,' complete with intermission, and performances featuring aerial acrobats and using the advanced, robotics-assisted technology and super-high-definition LED screens in the innovative Two70º aft lounge. Parkour artists have been under consideration, too.

An Emmy- and Tony Award-winning performer, Chenoweth is participating in a Quantum of the Seas executive review committee, previewing the concepts for all of the shows, productions and themed events in development, and giving feedback on every aspect, ranging from sets and music to costumes, casting and more.

'Kristin is by far our most involved godmother yet and it is such a joy to be working with her,' said RCI's Lisa Lutoff-Perlo, evp operations.

'I have been blown away by what I’ve seen so far from the entertainment on board Quantum of the Seas and am just so impressed, and that’s not easy to do,' Chenoweth said.

Chenoweth, alongside RCI's Nick Weir, vp entertainment, will be hosting a live Google Hangout on June 11 at 4 p.m. EDT to reveal Quantum's entertainment offerings. The session is open to the public, who may submit questions.