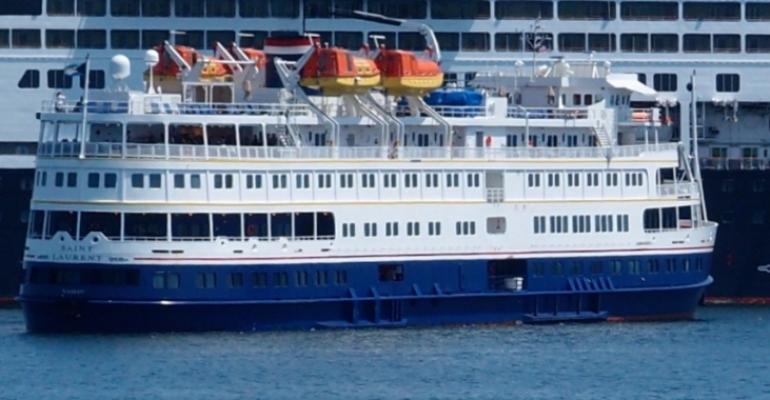 Friday afternoon update: Passengers and luggage were being taken off Saint Laurent in baskets attached to cranes following their clearance on board by US Customs and Border Protection officials. The US Coast Guard estimated it may take up to six hours to remove everyone from the ship. Passengers will be bussed to Montréal. Haimark Line's Saint Laurent hit a wall in the Eisenhower Lock of the St. Lawrence Seaway at Massena, New York, Thursday night. Nineteen passengers and three crew were taken to hospital with minor injuries, the president of FleetPro Ocean, the ship's management company, told Seatrade Cruise News.

The vessel remains in the lock, where the water has been partially drained, and a technical assessment is under way. Damage is limited to the bow area, and shipboard services remain functional.

As of late Friday morning, FleetPro Ocean president Lania Rittenhouse did not know if any people remained in hospital ashore but she said there were no serious injuries (two initially were reported). She said arrangements were being made to bus all passengers from the ship to Montréal.

Saint Laurent was en route to Toronto as part of a round-trip Montréal cruise, carrying mainly French and Swiss nationals.

There were 192 passengers and 81 crew on board.

According to a FleetPro statement, the ship made contact with a concrete approach wall bumper of the westbound door of the Eisenhower Lock at 9:15 p.m.

USCG said initial damage assessment indicated that 10 feet of the bow was pushed inward during the impact, causing water intrusion in the bow area. There have been no reports of additional water intrusion since the lock was partially drained.

If the extent of damage to the bow is minor—for example, limited to egress of water in the forepeak tank—it's possible repairs could take only a day or so, Rittenhouse said.

The St. Lawrence Seaway Development Corp. confirmed the ship is stable, and its inspectors are assessing the situation along with USCG and a FleetPro technical team. Nine commercial vessels are currently delayed, and navigation remains suspended until further notice.

Earlier, a USCG spokesman told Seatrade Cruise News 30 people had gone to hospital and two had injuries described as serious. According to Rittenhouse, 29 people had gone to the hospital but seven of those were accompanying the 22 injured. She said all the injuries were minor, and the ship's doctor looked after those who went to hospital throughout.

Response crews removed injured passengers Thursday night, according to the US Coast Guard Sector Buffalo, which responded to notification of the allision at 9:45 p.m.

USCG said Saint Laurent will remain in the lock with both doors closed until it can be moved to different location.

Masson said only the injured had been evacuated Thursday night. The cause of the accident is under investigation.

Haimark Line's 4,954gt Saint Laurent is operating its inaugural cruise season. The Bahamas-registered ship is operated by FleetPro Passenger Ship Management. It was built in 2001 as Cape May Light and previously operated as Clipper Voyager. It was refurbished in May before entering service for Haimark Line.