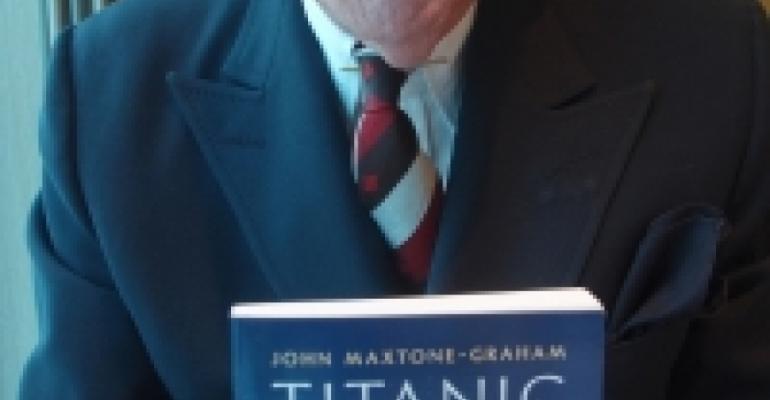 John Maxtone-Graham is pictured aboard Royal Princess in 2013 with one of his many books (Photo: Anne Kalosh)

Writer Jan Morris called him 'one of the deans of maritime history.'

Maxtone-Graham was a world-renowned expert on ocean liners and cruise ships who published scores of books.  Articulate, authoritative, dapper and engaging, he was a popular cruise ship lecturer, often accompanied on his travels by Mary, his vivacious wife.

Maxtone-Graham told Seatrade Cruise News his first book, 1972's 'The Only Way to Cross,' 'made me friends all over the world. It became a bible for the ship buffs.'

One of those is Peter Knego, cruise journalist, Maritime Matters blogger and owner of midshipcentury.com, who called Maxtone-Graham 'the ultimate ocean liner raconteur' who 'had a way with words that transformed the world of ocean liners into a realm that I have never been able to shake since reading "The Only Way To Cross" as an eager teen decades ago.'

Knego added: 'John's presentations were like masterful stage performances, delivered with authority, precision and a great passion for the subject. And in person, he was an elegant, charismatic and gracious man.'
Maxtone-Graham's most recent book was 2014's 'SS United States: Red, White & Blue Riband Forever' (W.W. Norton & Co.).
Two dozen other titles include 'Liners to the Sun,' 'Crossing & Cruising' and books about specific ships, from Normandie (his favorite liner) to Queen Mary 2. 2012's 'Titanic Tragedy: A New Look at the Lost Liner' (W.W. Norton & Co.) got a glowing review in The Washington Post, which opined so much has been written about the Titanic 'it is difficult to imagine there is much more to be said, yet John Maxtone-Graham says it,' putting 'interesting twists on a much-told story.'
When Princess Cruises introduced Royal Princess in 2013, Maxtone-Graham was booked for a six-week engagement on board. One of his lectures included a retrospective on the previous ships named Royal Princess.
At the time, Princess evp Rai Caluori said the line got requests for Maxtone-Graham and inquiries about where he would be cruising next. Caluori was a cruise director when he first met Maxtone-Graham in 1989.
'I was blown away by his presence, and he had the rare ability of being able to fill a 600- or 700-passenger theater,' Caluori recounted, adding that he continued to be impressed by Maxtone-Graham's diverse material, depth of knowledge and a delivery style that drew passengers in to the subject.
'You have to tell a story that's moving, interesting, pertinent and maritime,' Maxtone-Graham said. Putting his taste for music, clothes and dress in an earlier era, he thought of what he did as 'Edwardian tales for travelers. That attitude is what seems to appeal to people. On ship, I wear a tie and a jacket every day.'
Maxtone-Graham was born in New Jersey to Scottish-American parents and told an interviewer that may be why he became intrigued with the ocean separating the two countries. He began his career as a Broadway stage manager then took up writing about maritime subjects. Shoreside, he lectured in venues including the Metropolitan Museum of Art.
At sea he was a veritable celebrity who was frequently stopped for questions and photos. Aboard Royal Princess in Southampton, a waiter asked Maxtone-Graham to point out the berth where the Titanic set off on its fateful voyage. He did.
A presentation with Mary Maxtone-Graham related humorous stories about passengers. At their first performance decades ago, the actress Ruby Keeler was aboard.
'Titanic Survivor: Violet Jessop' was edited and annotated by Maxtone-Graham from the memoirs of a stewardess who survived the sinkings of the Titanic and the torpedoed Britannic. She had been the stewardess for Maxtone-Graham's mother aboard the Majestic in the 1920s. Jessop's tale, and others, were part of a gripping 'Survivor Sagas' lecture.
In recent years Maxtone-Graham's editor wanted him to cover the Andrea Doria, but he protested: Not another sinking ship!
Instead, he produced a lavish tome on the United States, the fastest ocean liner ever built.
Maxtone-Graham's oversized business card includes a list of his books and a note: 'Often at Sea, Write by E!'. He estimated he had taken more than a thousand cruises and delivered many hundreds of lectures at sea.
He liked being on the water. Once he lamented to Seatrade Cruise News that so much of cruising today isolates passengers from the sea. As he put it, ships are 'full of tricks.'
'What disheartens me is there's so much going on, it turns you away from the sea. I like to think that passengers are in love with the sea.'
According to The New York Times, besides his wife Mary, Maxtone-Graham is survived by daughters Sarah Francois-Poncet and Emily Maxtone-Graham, sons Ian, a writer and producer for 'The Simpsons,' and Guy, a television and film comedy writer, two grandchildren and a twin brother, Michael.
Copyright © 2023. All rights reserved. Seatrade, a trading name of Informa Markets (UK) Limited.
TAGS: people cruise lines ships
0 comments
Hide comments
Related