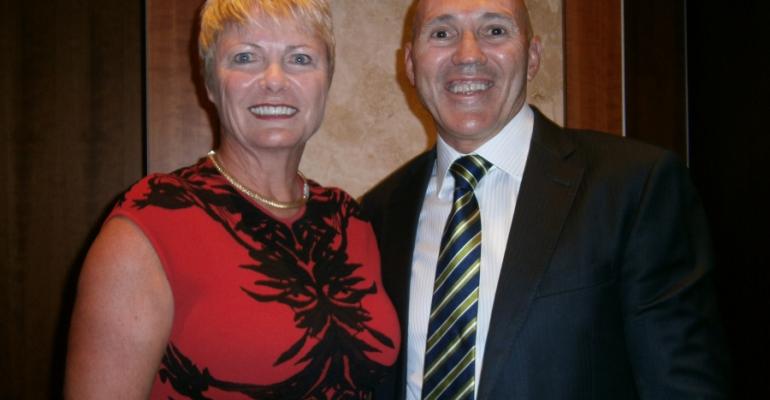 Brett Dudley with Sarina Bratton, one of his original suppliers

A birthday celebration for the ecruising Group of Companies was held in the grand ballroom of Sheraton on the Park Sydney Tuesday night.
Industry heavyweights paid tribute to Brett Dudley who founded online cruise travel company ecruising exactly 15 years ago.
In 2000 Dudley launched an annual Sale Day at the former Wharf 8, Darling Harbour, which was a huge success. It ran for six years, hit an annual turnover of more than A$1m and attracted buyers from all over Australia for the special one-day bargains.
Over the years the multi-award winning Dudley, who was a speaker at Cruise Shipping Asia-Pacific 2014 in Hong Kong, has chartered ships, trains and aircraft for the company’s global cruise-and-stay tours and has booked some of the world’s top hotels.
He told guests at the birthday dinner, which was sponsored by APT and Carnival Australia, there are 30,000 members of ecruising’s POSH Club for repeat travellers and he thanked his wife, Philippa, for the role she has played in the company’s achievements.
Gavin Smith, regional vp Asia Pacific for Royal Caribbean International, told guests that Dudley is often described as an entrepreneur.
‘I call him a pioneer,’ Smith said.
Copyright © 2022. All rights reserved. Seatrade, a trading name of Informa Markets (UK) Limited.
TAGS: people cruise lines
0 comments
Hide comments
Related