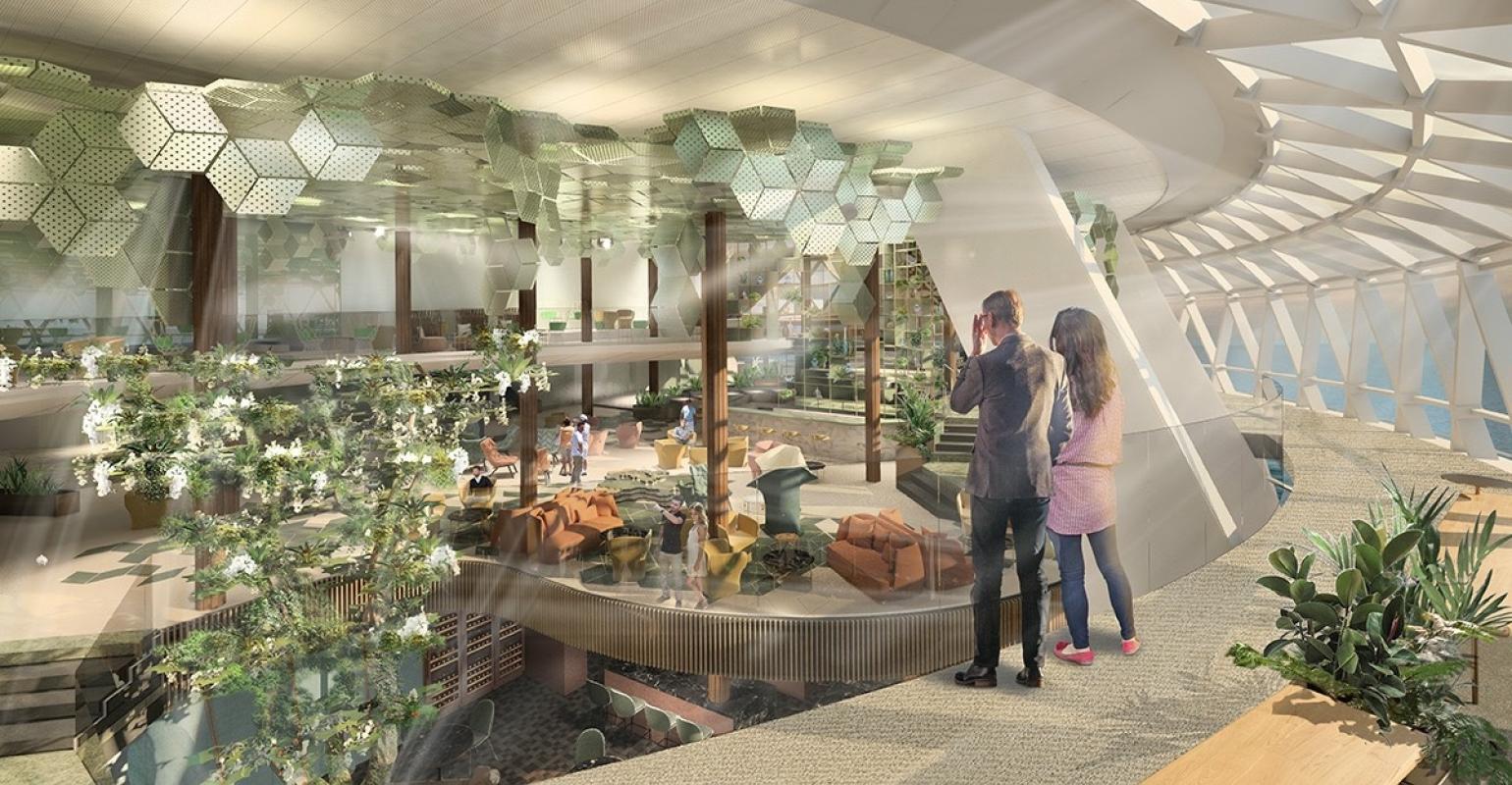 A 90-meter/295-foot ramp provides panoramic views, both inward and outward
Eden, a triple-deck, glass-enclosed lounge/restaurant with programming that changes throughout the day from chill to playful to sinful, is the latest exciting reveal for Celebrity Edge.

'We thought we'd have some fun,' Lisa Lutoff-Perlo, president and ceo, Celebrity Cruises, told Seatrade Cruise News. 'It starts out as a chillful, beautiful, pure place. You can go in the morning and sit in a swing and hear a sitar. There's alfresco dining on both sides. Then it starts transforming, getting a little more playful during the day. It will have pop-up entertainment, lectures, culinary and wine tastings. You can also get a great quick, light lunch.'

After dark, though, 'As in Eden, after Eve took a bite out of the apple, it gets a bit sinful.'

Patrons can come for a set, five-course dinner or drinks. At the end of the night there will be a 'surprise, crescendo experience,' Lutoff-Perlo said.

Innovative architect Scott Butler of Wilson Butler Architects—who worked on Celebrity Solstice and Royal Caribbean's Oasis and Quantum classes—is the mastermind behind Eden's complex architecture. It's built on a spiral known as the Fibonacci sequence that is represented in nature by the bloom of a rose or the curl of a snail’s shell.

A 90-meter/295-foot ramp provides panoramic views, both inward and outward.

(And, pssst—she'll be working on another space, to be announced, aboard Celebrity Edge.)

Also, Variety Worldwide, the nightlife impresarios behind Queen of the Night—a fusion of dance, music, fashion, circus, culinary delights and theater—created an experience that will transform Eden after dark with some edgy elements.

Eden is an evolution of Celebrity's Sky and Observation lounges, with an added, garden-like feel. Since a closer connection to the sea is one of Celebrity Edge's guiding principles, the space is surrounded in glass.

Celebrity's Cornelius Gallagher, a noted chef who's associate vp food and beverage operations, is inventing an all-new menu for the restaurant. It will be fixed but with two imaginative options for each course. For example, canapé choices may be beetroot tartare on lava rocks or fiddlehead ferns with whipped Savarin cheese. One entree is called 'Tidal Pool,' another, 'Life After Death.'

The idea is that with its dynamic programming, no two visits to Eden will be the same.

The space was introduced in an event at the Brooklyn Botanic Garden Tuesday night, and follows the first Celebrity Edge reveal in March.