Maine charts a banner cruise year, chips away at challenges 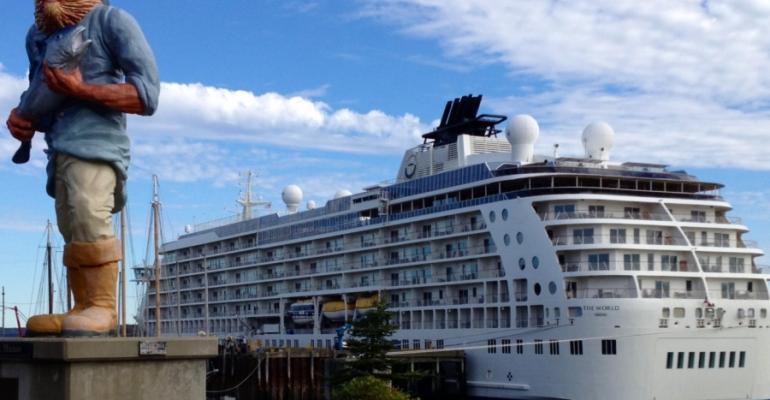 Eastport - a favorite destination globally of The World, pictured

Amy Powers, director of CruiseMaineUSA, favors slow, consistent growth because that's healthier and sustainable. The state's variety of ships, lines and itineraries is a positive, too, she said, and ports will attract more than half a dozen maiden calls this year, ranging from Amadea to the newly inaugurated Pearl Mist.

Bar Harbor remains the leading destination, while Portland, Rockland and Eastport all have notable growth that is expected to continue in 2015.

Challenges include port congestion in the peak fall foliage period, convincing cruise lines to spread out their calls through the summer months and Customs and Border Protection issues. Because Maine has many foreign arrivals, streamlined CBP clearance is critical. For Bar Harbor, a tender port, this is a particular challenge.

Of Bar Harbor's 138 calls this year, 51 are foreign arrivals requiring CBP clearance. A total of 165,176 passengers on 31 ships from 19 lines are forecast. There are 22 double ship days, 11 triple ship days and one four-ship day.

'Congestion is a concern in Bar Harbor,' Powers said, adding that the port plans to provide a berthing facility.

Portland has 74 calls and 82,104 passengers on 20 ships from 15 lines. The city continues as a homeport for a pair of American Cruise Lines vessels, and sister company Pearl Seas Cruises will embark several Pearl Mist voyages.

Ferry service linking Portland with Yarmouth, Nova Scotia, was recently revived with a newly built vessel, Nova Star. A ferry provides diversity and jobs while contributing to the vitality of a working waterfront, Powers said.

Rockland will handle nearly 5,000 passengers on 32 calls including a first visit from Holland America Line's Eurodam. Eastport, a Class A port of entry, has a total of five calls, by Pearl Mist and Blount Small Ship Adventures' Grande Mariner. Two years ago tiny Eastport was ranked among residential ship The World's best destination experiences globally.

Next year Eastport will score 10 calls—six by Grande Caribe and four by Pearl Mist.

And Rockland will blossom with more than 15,000 passengers. It will be among three Maine ports featured on an innovative itinerary operated by Royal Caribbean International's Brilliance of the Seas, round-trip Boston, that also visits Canada's Halifax, Charlottetown and Sydney.

There is a lack of clarity on whether CBP's new Automated Passport Control (APC) kiosks will streamline clearance in the future, or if passengers will still have to present themselves to CBP inspectors.

'We are closely monitoring advancements with technology and possible use of APC kiosks,' Powers said.

On another matter of regional focus, Powers advocates for spreading calls out during the summer to ease port congestion during the peak fall foliage period.

'As a region we still have a long way to go to convince the industry that the product is as good in the summer and the spring as the fall,' she said.

Yet Maine has always been a strong summer draw. The state had 29.8m tourists last year, a 6.7% increase. Nearly 3m were visiting for the first time.

'We are Vacationland,' Powers said, referring to the motto that began appearing on license plates as far back as 1936, and Maine traditionally enticed American dynasties like the Roosevelts, Astors and Rockefellers.

'It's this iconic, historical vibe a lot of people know,' she said.

Though September and October are the peak months for cruising, calls began on May 5 this year and stretch to Nov. 1.

Holland America operates very successfully through the summer and has two ships a week in Bar Harbor where it accounts for more than 40 of the 138 calls.