Maritime artist to paint Queen Mary 2 aboard a crossing 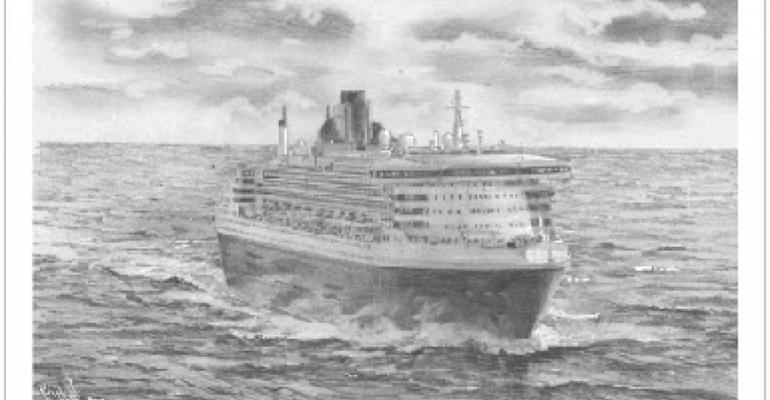 Preparatory sketch for the oil painting of Queen Mary 2 that Robert Lloyd will create on a crossing
Passengers aboard Queen Mary 2’s Nov. 12 trans-Atlantic voyage from Southampton to New York will have the opportunity to own an original oil painting of the flagship at sea that will be created during the crossing by renowned maritime painter Robert Lloyd.

Lloyd will spend time each morning in Queen Mary 2’s Grand Lobby working on the painting, and passengers will be free to ask questions as it takes shape over the course of the seven-night voyage. The painting will be executed in oils and will depict Queen Mary 2 cutting through the waves on the trans-Atlantic route.

On the last afternoon at sea, the painting will be auctioned to the highest bidder, with all proceeds going to The Prince’s Trust charity. Since 2007, Cunard Line has raised more than $1.6m dollars for The Prince’s Trust.

Cunard has commissioned Lloyd a number of times to create paintings that adorn all three ships of the fleet.

'His paintings have also been presented to distinguished guests such as Baroness Thatcher when she visited to commemorate Cunard’s role in the Falklands Campaign,' said Cunard chairman David Dingle.

'To have Robert on board creating such an impressive painting for auction with the proceeds going to The Prince’s Trust is something very special indeed.'