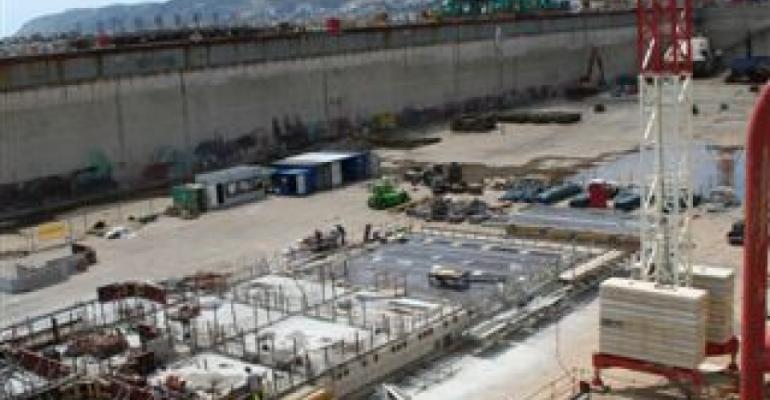 Drydock 10, one of the world's largest, is being upgraded for mega-cruise ship repairs and maintenance

The Marseilles Fos port authority is targeting mid-2015 to complete the €28m renovation of its giant Drydock 10 to provide a strategically located base for cruise ship repair and maintenance.

At 465 metres long and 85m wide—the third biggest in the world after Lisbon and Dubai—the drydock will have capacity for the latest-generation fleet in the Mediterranean, where 65% of the world’s largest cruise vessels operate. These include ships of up to 360 metres that currently call at Marseilles.

Repair operations will be carried out under a 25-year franchise awarded to a group featuring Italy's San Giorgio del Porto.

Drydock 10 opened in 1975 to repair supertankers—Maseilles Fos is among the global top 10 oil ports—but came out of this service in 2000 as the VLCC repair market shifted east. Since then Marseilles has become the leading cruise port in France.  Last year the port handled 454 cruise calls by 76 ships from 38 companies, with passenger numbers rising by 31% to a record 1.17m.  Homeport passenger numbers rose 17% to 365,000, a 30% proportion that is heading for 45% going forward.

In 2011 the port authority responded to this fast-emerging market and lack of large repair centres by agreeing a major overhaul of its biggest drydock. The main element is the construction of a new dock gate representing €13.35m of the total cost. Other phases include refurbishment of the pumps, electrical power system and equipment. After more than two years of preparatory study and design, the work started early this year and is due for completion next June.

The 9,100 tonne gate has been designed for a 50-year lifespan and will be 87.5 metres long, 15 metres wide and 13 metres high. Design, construction and commissioning of the gate, together with project management, was awarded to a group led by French civil engineers Spie batignolles TPCI. The group includes design and structural studies leader Setec TPI and its subsidiary Hydratec, maritime works specialist EJN Negri, pumps and pipework firm Cofely Ineo and equipment sub-contractor Delta Techniques.

The operating franchise was signed in June 2013 by San Giorgio, its subsidiary Chantier Naval de Marseille (CNM) and cruise ship builder Mariotti. The group also has a commercial agreement with the STX France yard in Saint Nazaire. CNM already operates two smaller drydocks up to 320 metres long and the port has six further drydocks up to 171 metres long serving the workboat and yacht sectors.