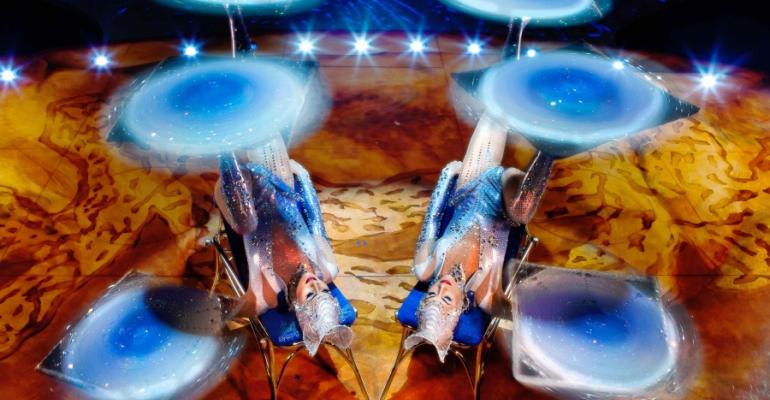 The cruise line and the Montréal-based Cirque have formed a long-term partnership for exclusive shows. Two nightly performances will be presented six nights a week, accompanied by dinner.

In 2004, Cirque du Soleil and Celebrity Cruises announced an exclusive, six-year agreement that was to entail sponsorship of touring shows, pre- and post-cruise experiences, cross-marketing and an entertainment concept on select ships. For awhile Cirque characters interacted with passengers two hours nightly in a specially decorated lounge on two vessels, and there was Masquerade Ball. These were replaced by a 30-minute 'Taste of Cirque du Soleil' show twice a week. The relationship fizzled in late 2005.

The Cirque plans with MSC Cruises sound much more substantive.

The shows will take place in a $21m custom-built entertainment and dining lounge equipped with the latest technology and tailored to the Cirque performances. This 10,760-square-foot, 450-seat aft lounge will have a 200-seat dining area for dinner or drinks before performances.

Cirque du Soleil artists will deliver two shows created exclusively for MSC Cruises. They'll be available only on the four planned Meraviglia ships—two firmly contracted and two options—starting with MSC Meraviglia. It begins sailing in June 2017 in the Mediterranean.

For her part, Yasmine Khalil, president of 45 DEGREES, Cirque du Soleil’s special projects company, said MSC represents a 'long-term partner with a clear vision about trends in the cruising industry and a strong desire to be the leader by bringing entertainment on board to a whole new level.'

The 167,600gt MSC Meraviglia is due for delivery from STX France in May 2017. The ship will spend its first summer sailing the western Mediterranean. Passengers can embark at Genoa, Marseille or Barcelona. A second Meriviglia newbuild is to arrive in 2019.

Norwegian Cruise Line currently offers a Cirque Dreams & Dinner Jungle Fantasy on Norwegian Breakaway, but that was developed with a Florida company unrelated to Cirque du Soleil. Earlier, Norwegian Epic debuted a Cirque Dreams show, also with the US company.