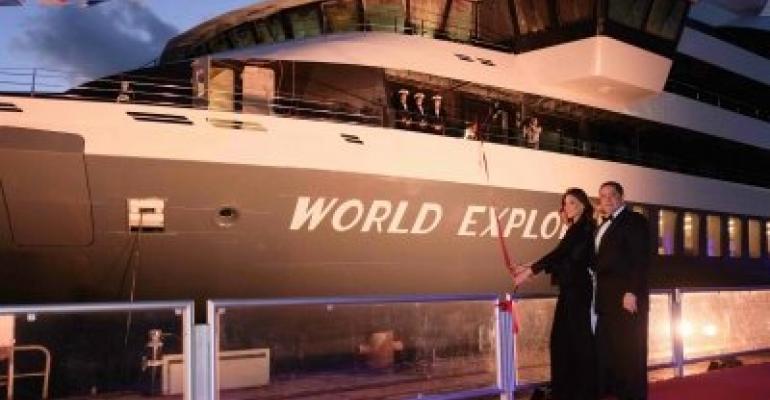 The black tie event on Saturday evening drew Prime Minister António Costa amid a constellation of government officials, navy brass, US Ambassador George Glass, guests in long gowns and furs, and cruise industry partners. They strolled a red carpet into a lavish tent beside the ship, mingling over Champagne and caviar before moving into a theater to hear Ferreira's vision and acknowlegements for the the ship—which is almost completely outfitted by Portuguese companies.

In a lively production using a scrim, a polar bear lumbered across the stage at one point and the next minute cariocas danced the samba, illustrating the destination range of the vessels Ferreira is building.

Bruni cut a red ribbon, releasing a Methuselah of H. Blin Champagne against the hull, before performing songs from her recent albums and inviting Portuguese singer and songwriter Pedro Abrunhosa for a duet. Dinner was served beneath chandeliers.

A peek at the ship

Post-midnight guests embarked World Explorer where a lavish after-party with more Champagne, vintage port, chocolates and cheeses were served. Only a few rooms were available for viewing, but they gave a hint of the ship's sophisticated style and high-quality materials.

Earlier in the evening, Bruni told a throng of photographers she was 'ready to go' on World Explorer, 'especially to Antarctica,' since her family had received Mystic Cruises parkas from Ferreira (along with a fabulous gold necklace she wore while performing).

Parkas were also presented to the prime minister and to Andrew White, president of Quark Expeditions, the charterer of World Explorer for Antarctica seasons.

There were VIPs aplenty, but Ferreira was really the star of the evening. He's practically a national hero for having built up Douro River cruising before now branching into expedition newbuilds. He plans a fleet of 10.

'He's really something special. He started this company from nothing 25 years ago.' Portuguese shipping journalist and author Luis Miguel Correia said.

Capt. Filipe Sousa, who will take out World Explorer upon its delivery in six weeks, expressed pride in working for a Portuguese cruise line and a Portuguese owner.

'It feels wonderful,' Sousa said, adding he was attracted to commanding a small, ice-class ship with cutting-edge technology that will explore remote destinations like Greenland and Svalbard. He has experience in those places over a 23-year career that included a long stint aboard Funchal.

'We're delighted to be a partner for crew management,' said Per Bjørnsen, director, V. Ships Leisure. 'We are passionate for this industry and so when we can share the experience with passionate people like Mário [Ferreira], it means a lot. The industry is so consolidated now. It is nice to see new shipowners, operators and brands. It makes the industry more vibrant.'