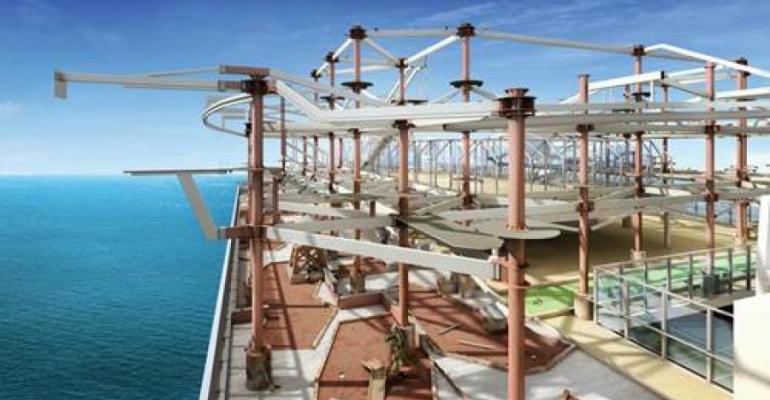 When Norwegian Escape begins sailing from Miami in November next year, the ship will sport what Norwegian Cruise Line touts as the largest ropes course at sea. This three-story multiplex of challenges will have two planks and five Sky Rails, zip tracks that allow cruisers to soar through the air.

Norwegian Escape builds on the success of the Breakaway-class ships, according to Drew Madsen, Norwegian's president and chief operating officer. At 164,600gt, it will be the line's largest vessel.

The ropes course, for all ages, has 99 elements. The three-story elevated course will span the width of the ship with features on both sides. Challenges include two narrow planks that extend eight feet from the side of the ship. The longest of the Sky Rails also takes cruisers out over the sea. There are three Sky Rails on the main ropes course and two on the kids’ ropes course.

The water park offers four multi-story slides, a dedicated kids’ aqua park, two pools and four hot tubs. The new Aqua Racer, a tandem water slide, allows competitors to race side-by-side on tubes as they twist and turn to the finish line. Norwegian Escape will reprise the Free Fall, which debuted on Norwegian Breakaway. These side-by-side slides give a free fall when the floor drops, propelling riders into a thrilling loop. A family-friendly open-flume body slide provides a calmer ride.

The kids' aqua park promises enhanced attractions, an enclosed tube slide and a two-story climbing structure. Among the interactive elements are water cannons and elevated buckets that deliver surprise drenchings. Cranks and spray features, a multi-story tower, a rope bridge and lookout platform are other attractions.

Norwegian Escape’s sports complex also includes a full-size basketball court and a bocce ball court, a first for the line.

This will be the sixth Norwegian ship to offer Nickelodeon-branded entertainment, including opportunities to meet characters like SpongeBob SquarePants, Patrick Star and Dora the Explorer. Among the activities are Nickelodeon Pajama Jam Breakfast, Dora’s Dance Party, Story Time with Dora and Nickelodeon arts and crafts.

In a first for the line, as part of the Guppies program, Norwegian Escape will offer childcare services for children ages 6 months to 3 years. The nursery will include an area for play time and activities and a separate nap space. Plus, the Guppies program will have an area for parents and babies that offers sensory-based games, interactive media and themed activities hosted by an early years coordinator.

An expansive Splash Academy complex is centrally located on Deck 5, for supervised activities in groups for ages 3 to 5, 6 to 9 and 10 to 12. This is located near the ship's family-friendly ocean-view staterooms, accommodating up to five people. As on all Norwegian vessels, when parents enter they will use the e-Youth tablet-based electronic registration system, swiping their keycard to register their children and inputting a password for additional safety to sign in and pick up the youngsters.

A forest-themed play zone gives space for creative games and play time, while an interactive dance space has a large video screen.

New on Norwegian Escape, children participating in Splash Academy will get an enhanced version of the circus program, with additional skill options and an innovative grand finale. Kids will also have an opportunity to participate in Officer Snook Theme Day, an expansion of Norwegian’s current program that will share an interactive environmental message through games and activities.

Rounding out Splash Academy is a lounge area and a separate full-size cinema with bean bags.

Entourage, on Deck 17, is a high energy teen zone exclusively for ages 13 through 17. It's equipped with lounge furniture and a central gaming station. Complete with neon lighting, the space also includes air hockey and foosball. In the evening, Entourage transitions into a teen nightclub featuring a nightly theme, team challenges and give-aways. The space is adjacent to the ship’s video arcade.

Under construction at Meyer Werft, Norwegian Escape is scheduled to begin eastern Caribbean cruises from Miami on Nov. 14, 2015. The year-round sailings are to visit St. Thomas, Tortola and Nassau.