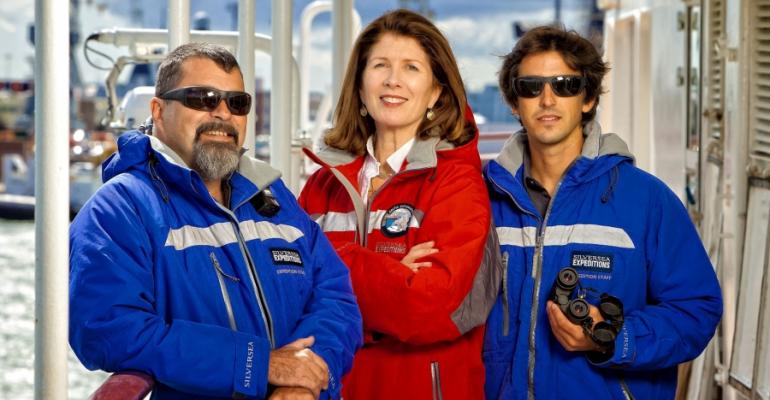 World-renowned explorers Rebecca Stephens MBE and Michael Palin CBE will be involved in the centenary observations of Sir Ernest Shackleton's Endurance expedition with Silversea Expeditions and the Royal Geographical Society (with IBG).

The story of how Shackleton led his men in the Weddell Sea party over ice and ocean to safety is one of the greatest survival tales in history. In November 1915 Shackleton's ship, Endurance, could no longer navigate the frozen waters of Antarctica and his expedition faced the daunting task of surviving the unforgiving climate and environment while waiting for the ice to break up.

This November, marking 100 years since the stricken expedition team managed to endure 138 days in one of the most inhospitable places on earth, the first in a series of Silversea expedition voyages will depart Ushuaia, Argentina, to retrace Shackleton's journey to Antarctica.

Explorer and journalist Rebecca Stephens, the first British woman to climb Everest and the Seven Summits, will be aboard Silver Explorer as part of the enrichment program.

Continuing the centenary celebrations during November Silversea, in partnership with the Royal Geographical Society (with IBG), will host a Shackleton experience one evening at the RGS headquarters in central London with the renowned travel writer, broadcaster and actor Michael Palin as guest of honor.

The evening will mark the opening of a major exhibition, 'The Enduring Eye: the Antarctic Legacy of Sir Ernest Shackleton and Frank Hurley,' at the RGS from the end of November to the end of February.

Palin has journeyed to the North and South poles, the Sahara Desert, the Himalayas, Eastern Europe and Brazil. Between 2009 and 2012 he was president of the Royal Geographical Society.

Travelers booking one of the 18-day Antarctica voyages this November and in January, February and December 2016 will hear from distinguished historians on board and visit areas including Elephant Island, South Shetland Islands, where Shackleton and his crew were stranded for 105 days.

The ship will call at South Georgia, where Shackleton and five of his crew first touched land after crossing 878 miles (1,413 kilometers) of ocean. Passengers also will be able to visit Shackleton's burial site in Grytviken.

Silversea's long-term partnership with the Royal Geographical Society (with IBG) has other benefits for those booked on Silver Explorer. A shipboard exhibition will show a specially curated gallery of images by official Endurance photographer Frank Hurley, who documented the expedition on film and through stills photography.