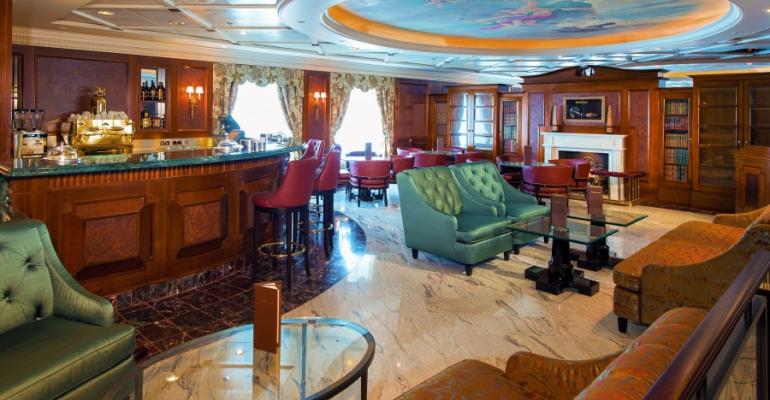 Oceania Cruises welcomed Insignia back to the fleet Thursday following an extensive drydock after a two-year charter to Hapag-Lloyd Cruises. Insignia is the first of three sister ships to undergo refurbishment in a program that will total $50m. Nautica and Regatta are scheduled to enter drydock and receive similar enhancements over the next four weeks.

The Insignia work was completed in Marseille.

The makeover brings many of the interior design elements from Oceania newbuilds Marina and Riviera while maintaining the most appreciated features of the 684-passenger ships. In addition to elegant new furnishings and décor for all public rooms, suites and staterooms, Insignia added several new amenities including the Baristas coffee bar, a cook-to-order grill at Terrace Café and new outdoor recreation on the Sports Deck.

A version of the Artist Loft enrichment center was added exclusively to Insignia during the docking In preparation for two 180-day world voyages. The 'Around the World in 180 Days' cruise departs from Miami on Jan. 10, 2015, and the 180-Day World Odyssey' sails from Miami on July 8, 2015.

Insiginia's Owner’s and Vista suites received an all-new bathroom design described as elegant yet contemporary. The bathroom features wall-to- wall marble with a decorative inlay centerpiece and an expansive granite vanity that sits opposite an oversized shower. The Penthouse Suites received all-new furnishings, rich upholstery and a color palette that reflects the sea, sun and sky. All staterooms were appointed with new décor elements.

The Terrace Café was redone from top to bottom. Included are new furnishings, floorings, fixtures and lighting. Oceania said the pièce de résistance is the cook-to-order grill for steaks, chops and lobster tail.

From Marina and Riviera, the coffee bar Baristas, where master baristas prepare complimentary illy brand espressos and cappuccinos throughout the day, made its debut on Insignia. The venue is centrally located on Deck 5, near the Grand Dining Room.

The Sports Deck atop the ship received a new miniature golf course and shuffleboard courts, along with other deck games. The main pool area, ringed with luxurious sun beds, has blue and white mosaics that contrast with the teak decking.

The all-new Artist Loft is tucked inside Horizons Bar and will provide a variety of enrichment programs.

The transformed Insignia set sail Thursday afternoon on for a seven-day 'Jewels of Europe' cruise.

Similar enhancements will be added to Nautica and Regatta during their upcoming drydocks, with Nautica scheduled to debut on May 16 for a 10-day 'Cliffs & Coves' cruise and Regatta on June 7 for a 10-day 'Majesty of Alaska' cruise.