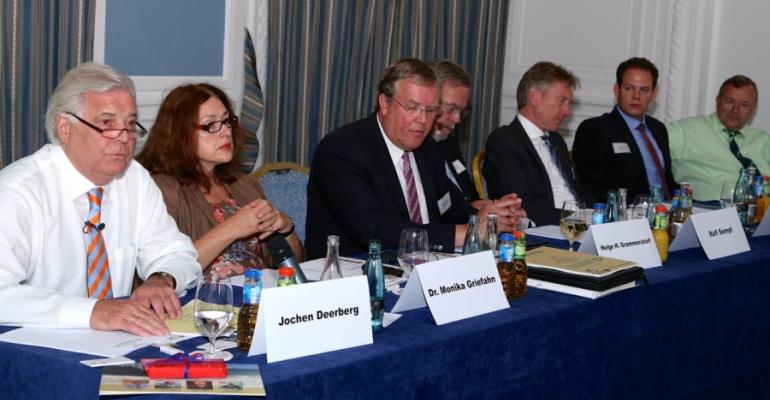 Round table discussion at Hamburg's Atlantic Hotel
The cruise industry needs a network of waste reception facilities in order to increase its recycling rates, and ship operators should be offered refunds to make recycling commercially more viable, whilst a globally standardised container system for landed waste would cut logistic costs and reduce handling time.

These were key conclusions drawn by a panel of specialists at a Round Table conference on cruise ship waste hosted by Deerberg-Systems in Hamburg on Monday.

Helge H. Grammerstorf, managing director of SeaConsult HAM GmbH and director of CLIA Germany, noted environmental protection is, ‘not a new issue for the cruise industry’ and said CLIA has suggested guidelines comprising more than 30 standards on waste handling to its members, all exceeding current regulations.

Grammerstorf suggested the cruise industry should increasingly, ‘think in systems’ and implement hybrid solutions meeting the demands of different operational ranges. He also stressed adequate reception facilities in ports were needed for ships to deliver separated and processed recycling material.

Dr Monika Griefahn, chief sustainability officer of AIDA Cruises said ports should reward operators for sophisticated waste sorting and refund landed recycling material, adding only four ports visited by AIDA have implemented such an approach. ‘This is not enough,’ she stressed

Dr Griefahn highlighted port reception facilities greatly differed across the world, and conceded that incineration was in certain cases preferable to the landing of waste.

The former federal state minister of the environment, Dr Griefahn said she ‘always used to be against incineration; but if adequate shoreside treatment is unavailable, incinerating waste is certainly better than landing it to see it being dumped onto wild landfills afterwards.’

She said AIDA, like many cruise lines, is trying to eliminate packing, for example by serving wine supplied in returnable casks rather than bottles. She also referred to carpets fitted onboard AIDAaura which will be returned to the supplier at the end of their lifetime to be recycled for the production of new carpeting.

Ralf Sempf, board member as well as head of materials management of Meyer Werft, suggested waste management systems fitted on cruise ships should be ‘resistant, reliable and easy to operate’ and allow an easy, fast landing of waste as well as recycling material given fairly short docking times in ports.

Representing Hamburg's Eckelmann Group, Christoph Buss identified challenges at the ship/port interface. ‘Clean sorted materials are the base for better recycling on land and can even generate revenue for the cruise lines’, he outlined.

Current weaknesses included the logistic complexity of physically landing waste (especially in tidal ports such as Hamburg, where cranes need to be deployed) and to re-process it for recycling.

Buss also mentioned the complex waste disposal tender calls submitted by some operators. He referred to the lack of a globally standardised container system to land recycling material from cruise ships, ‘as the biggest challenge’.

Such a system would speed up the processes and bring costs down as contractors would land containers filled with recycling material, and provide empty ones in exchange. Some participants cited concerns said that it would be difficult to install on existing ships and difficult to adapt for varying shoreside conditions around the world.