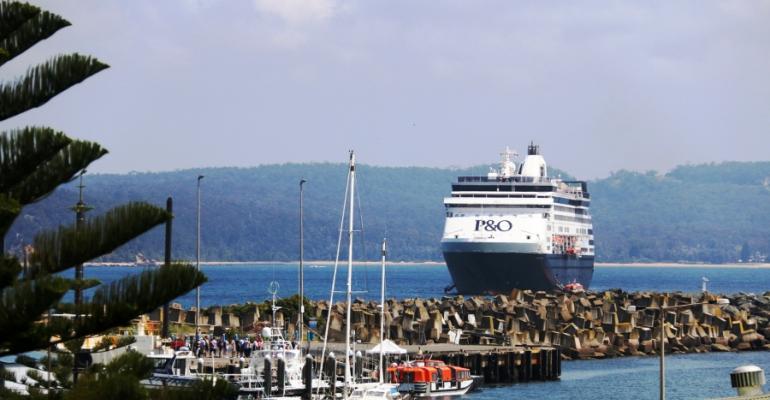 Pacific Eden got a warm welcome to Eden on Sunday

Despite her late departure from Sydney on Saturday P&O Cruises Australia’s Pacific Eden made up time and arrived as scheduled at her namesake port on Sunday.
As reported, Pacific Eden’s arrival in Sydney on Saturday was delayed by several hours due to a low pressure trough affecting the east coast of Australia. The 1,500-passsenger ship encountered strong winds and a heavy swell and speed was reduced for the comfort and safety of passengers.
Company president Sture Myrmell said the 55,820gt ship received a warm welcome from the people of Eden, which is on the Sapphire Coast of New South Wales.
Myrmell said passengers visited the Killer Whale Museum, as well as local oyster farms and art boutiques.
Pacific Eden, which is on an eight-night ‘Secrets of the South’ round cruise, will also make a maiden call at the Mornington Peninsula, southeast of Melbourne, on Tuesday and another maiden call at Portland, the oldest European settlement in Victoria, on Wednesday. She will visit Kangaroo Island before returning to Sydney.
Copyright © 2022. All rights reserved. Seatrade, a trading name of Informa Markets (UK) Limited.
TAGS: ports & destinations cruise lines ships
0 comments
Hide comments
Related