Peak viewing at Molde and Andalsnes 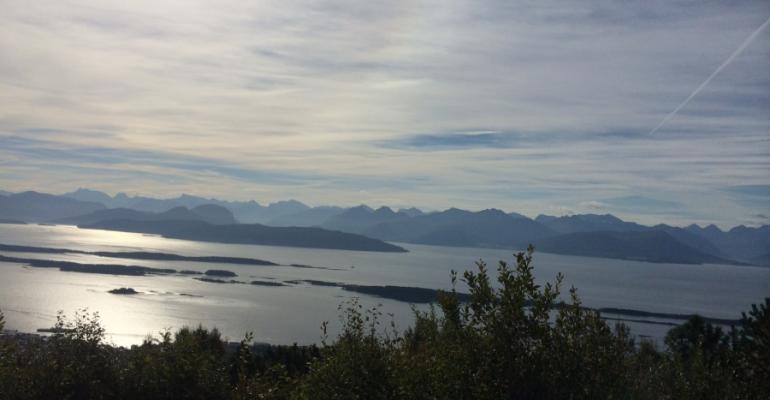 Molde and Andalsnes Cruise Port, located on the top of Fjord Norway is offering a third option for smaller visiting ships to call at Eresfjord.

Some 20 of the 93 ships calling at Molde and Andalsnes this year will visit both ports on the same stop, he confirmed.

The nearby village of Nauste, with 400 inhabitants, is the departure point for a variety of tours including Mardalsfossen, the world’s fourth tallest waterfall, Oppigard farm well known for its rose garden, prehistoric rock carvings at Bugge as well as a full day bus tour from Molde visiting Bud fishing village, The Atlantic Road, onto Angvik - a trading post in the 1500s - before rejoining the ship in Eresfjord.

Participants on Cruise Norway and partners 2014 site inspection heard from Akselvoll today about plans to extend the cruise handling facilities at Andalsnes, and from the port’s ceo Ragnar Heggdal, on expansion underway at Molde’s number one attraction, Romsdal Museum, to turn it into a year round attraction from 2016.

The largest vessel to call at Molde’s 300mtr long quay is Royal Caribbean International’s Adventure of the Seas, in 2014. Next year, Disney Magic will make a maiden visit in June.

Costa is a long standing customer of Andalsnes where a new 15mtr free standing quay is due to start construction soon. Located 60mtr from the current 155mtr long berth, the €2m investment is scheduled to be finished in May next year and will provide a 75mtr extension of the existing facilities making it safer for ships to berth alongside, Akselvoll told Seatrade Insider.

The most popular excursion from Molde is a town tour including Romsdal Folk Museum displaying around 80 original houses and buildings dating from the 1600s to the 1960s. A number of these are decorated and furnished in period style and are open for visitors to see inside. the attraction is only accessible in the summer months and often displays of folk dancing, traditional break making, farming activities are presented in the open air museum which is 100 years old.

From 2016, the plan is to make it a year round attraction with a new 1,000 sq mtr plus indoor museum area being built in the grounds. This will house permanent exhibitions on Norwegian life and culture through the ages, with a cinema, interactive displays, café and shop.

Also visited on bus tours, or on a one hour hike, is Varden Viewpoint from where it is possible to see Molde, the fjord and its islands and a panoramic 180 degree view of 222 mountain peaks.

This afternoon, cruise line participants toured the Rosmdal valley and Troll Wall, headed back to Andalsnes on the Rauma Railway, before driving the Trollstigen zigzag road, visiting Eidsdal by ferry and onto Geiranger where they will spend tomorrow.