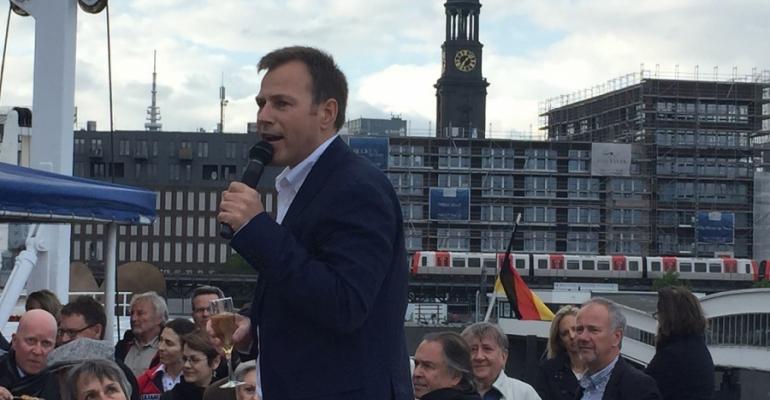 Poseidon Expeditions celebrated the arrival of newly chartered Sea Spirit with a party in Hamburg last night for travel agents, partners, and media.

The vessel has been time charted for a three-year period with an extension option, and was taken over in Portland, UK last week, following an overhaul.

Sea Spirit will depart from Hamburg to Ijmuiden Monday afternoon, for a showcase event to the Benelux-market in the Dutch city.

Subsequently the 114-passenger ship is due to embark on her inauguration cruise to Scotland and Iceland.

Sea Spirit operates under the management of FleetPro, with its affiliate FleetPro Leisure being in charge of on-board catering.

In a speech, Poseidon Expedition's vp Jan Bryde highlighted the company's successful expansion to the German market: Back in May 2014 Poseidon opened an own office in Hamburg which Bryde has managed since.

According to Steve Wellmeier, director sales & marketing US at Poseidon, and its German spokesman, John Will, the presence in Germany has developed favourable. Wellmeier and Will told Seatrade Cruise News Poseidon's presence in the world's second-largest source market for ocean cruising evolved in a way ‘exceeding the expectations’.

Following the welcome speech and dinner, Sea Spirit departed from Überseebrücke for a round-trip through the Port of Hamburg, passing among others Poseidons' German office for a salute. Shortly before midnight, surprise fireworks were displayed to celebrate the company's new fleet addition.

At the end of her three-day stay in Hamburg (which was coordinated by PWL Port Services as the local port and ground handling agent of both FleetPro and Poseidon Expeditions), Sea Spirit departed for Ijmuiden at 14:00 hrs today.

Poseidon is marketing Sea Spirit as a four-stars-ship with a dedicated multinational passenger mix: Poseidon attempts to have a balanced mixture of different passengers' nationalities on-board on each cruise. Sea Spirit's onboard languages are English and German.

A highlight is the new 'Sea Kayak Club': Participants can experience sea kayaking in the Polar Regions as part of a guided paddling group. The number of participants is limited to eight per voyage in the Arctic and 16 in Antarctica. For the new offer, Sea Spirit has been equipped with new Prijon HTP plastic double sea kayaks with rudder steering.

The response to Poseidon's new ship was positive among attending travel agents. ‘The German source market for ocean cruising been virtually dominated by Hapag-Lloyd Cruises for many years,’ commented a Hamburg-based agent, ‘now we are finally getting a new product with a different concept. I think that is a much-needed refreshment for expedition cruising in Germany.’

Another agent said she believed Sea Spirit can help to attract new Germans to the expedition segment: ‘Among my [German] clients interested in expedition cruising, many say they like to travel in multinational company and decisively not only with other Germans.’

Apart from Sea Spirit – which has been chartered on a year-round basis for operation in Artic during northern hemisphere summer and Antarctica during winter – Poseidon Expeditions continues to deploy the chartered ice breaker, 50 Years of Victory, on cruises to the North Pole in summer.

The Russian government has confirmed availability of that ship at least for the next three years until 2018. Established back in 1999, Poseidon Expeditions is registered in the UK, has a Russian founder, operations offices are based in Moscow, and sales offices located in Germany, the US, UK and Russia.