Qatar aspiring to greater heights in all things cruise and football 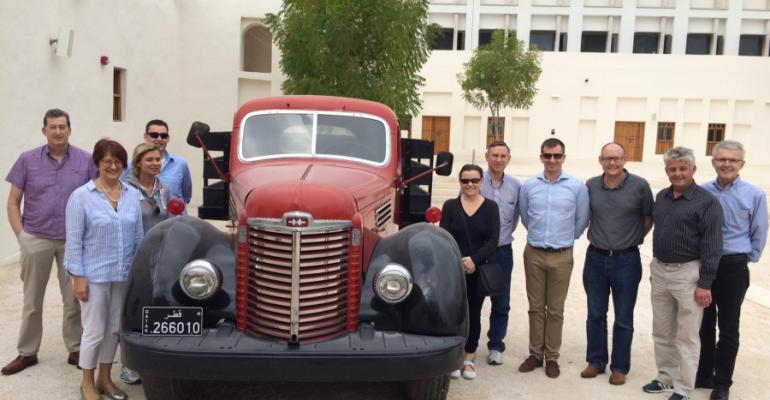 On the eve of Seatrade Middle East Cruise Forum 2015 in Doha, port officials confirmed Qatar is expecting a three-fold increase in passengers next season.

30 cruise ships bringing up to 50,000 passengers will call in Doha between October 2016 and April 2017, up from the eight calls scheduled this season.

First on the agenda was a site inspection of the new Doha Port Project, what is described as the largest industrial greenfield project in the Gulf. Cruise ships up to 200mtr in length currently berth at the downtown Doha Port located close to the popular Museum of Islamic Art.

It is anticipated the new Hamad Port, which envisages three large container terminals, will be ready to start taking large cruise ships at a dedicated 540mtr long berth with 'temporary' cruise terminal from the end of 2016.

The new port located 25km from Doha will take its first commercial ship end of next week at an Early Operations facility (which eventually will become Container Terminal 3).  Initial traffic handling will be ro/ro cargo and livestock vessels and large container ships will not start using the facilities (Container Terminal 1) until mid-2016.

As commercial ships start to re-direct to Hamad, the city-centre Old Port will be redeveloped as a dedicated passenger port. Detailed berthing plans are still under discussion but it is envisaged that there will be multiple berthing options for cruise ships of varying water depths.

Making Qatar a more attractive tourist destination is high on the agenda at QTA, with 7 million tourist expected annually by 2030. Following the port site inspection the cruise lines paid a visit to the Msheireb urban development project featuring four century-old houses in Doha’s oldest district which have been transformed into museums – including focus on urban architecture in Qatar, how the oil industry shaped the nation and one on Indian Ocean slavery.

Next came a visit to the Aspire Zone and its range of indoor and outdoor sporting facilities including 10 outdoor football pitches, tennis and basketball courts and inside the Aspire Dome, a full sized athletics track, a full size football pitch with seating up to  6,000 spectators, an Olympic size swimming pool as well as handball and basket ball courts.

Alongside the Aspire Zone refurbishment work is in full flow at the Khalifa International Stadium one of the proposed venues for the 2022 FIFA World Cup. Attending the Aspire Academy are 210 young fulltime students, aged 10 upwards, chosen for their sporting ability including soccer students whom it is hoped will compete for Qatar in the national team at the World Cup.

QTA is hopeful more cruise ships will start to call as lines look for more destinations withing the Gulf. 'We chose to showcase some of the new product offering that is available in Doha in the next three years as we know cruise lines plan in advance,' said Tony Williams, consultant at QTA.

In addition to catering to seasonal tourists, the creation of dedicated cruise ship facilities will also assist in providing temporary accommodation for more than 10,000 football fans expected to visit Qatar during the World Cup.

Whilst there is a massive construction effort underway to increase the number of hotel beds in time for the influx of players, fans and officials, earlier this year, QTA said it would be looking to accommodate some of the proposed visitors for the tournament on chartered cruise ships.