Quantum terminal at Bayonne is inaugurated 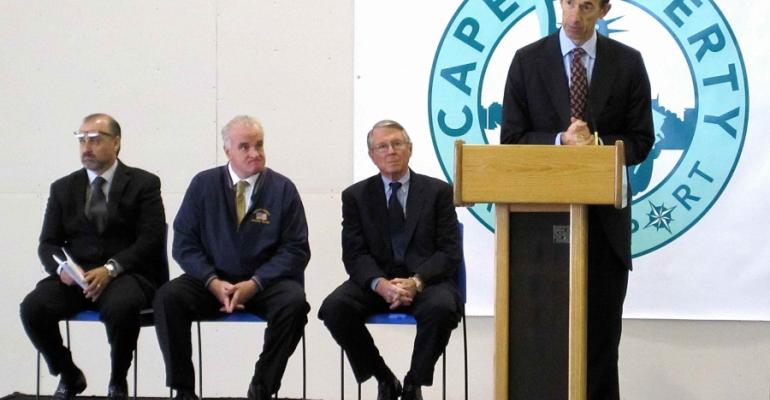 Key officials from the Port Authority of New York & New Jersey and Royal Caribbean Cruises Ltd. on Friday dedicated the new cruise terminal at Bayonne, N.J.'s Cape Liberty, which will receive Quantum of the Seas for its stateside arrival Nov. 10.

The first phase of the $55m port expansion includes a new terminal with 125,000 square feet of check-in, customs/immigration and luggage processing space, as well as a 950-car parking structure and pier improvements. The new facility is adjacent to the first cruise terminal, opened in 2004.

Adam Goldstein, president and coo of Royal Caribbean Cruises Ltd., thanked the port authority and the city of Bayonne for a 'successful collaboration to develop Cape Liberty for cruise tourism.' He said the terminal will 'perfectly complement our Quantum-class ships, which will be the most technologically advanced ships in the world, and help generate jobs and grow the cruise industry regionally.'

Together they dedicated the terminal to 'Art on the Working Waterfront,' unveiling 10 photographs that capture the energy and character of historic New York Harbor through the eyes of photographer and International Longshoreman Association member John Bacaring.

'The development of the new cruise terminal is another example of how public-private partnerships are supposed to work,' Larrabee said. 'We look forward to continuing passenger growth with the arrival of the Quantum-class vessels to the harbor in 2014 and 2015. It’s been a pleasure working with Royal Caribbean on this important project.'