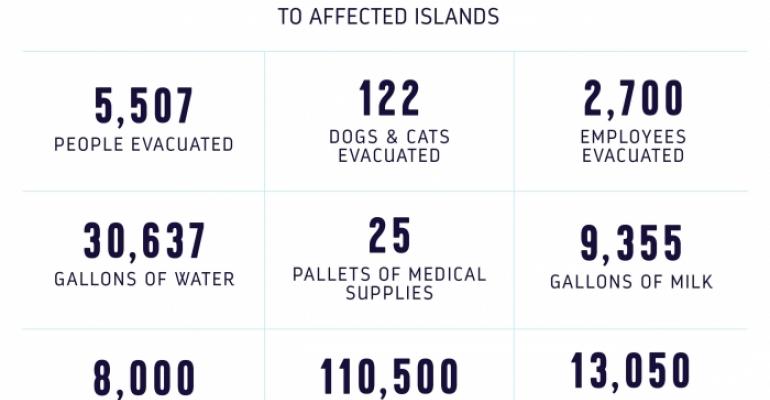 Adventure of the Seas arrived at Port Everglades Tuesday, carrying approximately 3,800 hurricane evacuees from Puerto Rico and the US Virgin Islands.

The evacuees included individuals who were identified and placed on an list by local government officials. Some were stranded tourists. A smaller number were Royal Caribbean employees and employees’ friends and families who were evacuated as well.

(As earlier reported, the Adventure of the Seas is scheduled to return to San Juan on Oct. 6 in time for its next scheduled cruise on Oct. 7.)

This was the latest in a weeks-long series of humanitarian actions related to hurricanes Irma and Maria. The company also deployed Majesty of the Seas and Empress of the Seas to carry relief supplies and transport evacuees.

In total, 5,507 people—and 122 dogs and cats—were evacuated on Royal Caribbean ships. Plus, the employees evacuated numbered 2,700, above and beyond the 5,507 figure.

In addition, the company has delivered nearly 1m cases of relief supplies to hurricane-impacted islands.

The ships have carried 25 pallets of medical supplies, 450 generators and 8,000 pounds of ice.