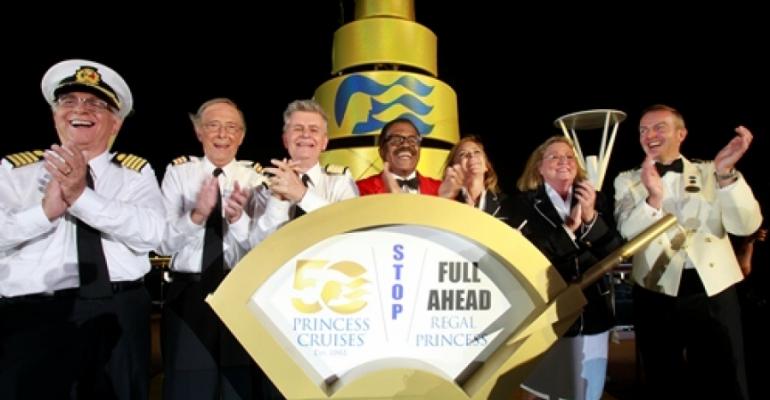 Fifty bottles of champagne smashed against the starboard side of the ship in honor of Princess Cruises' 50 years, and 'The Love Boat' stars led by Captain Stubing pulled a lever to release a giant 51st bottle before a crowd on Regal Princess' immense top pool deck.

Marion Ross, who with Florence Henderson was a co-godmother of Emerald Princess in 2007, proclaimed Regal Princess 'primo—better than any of the other ships.' Rich Little said he got lost trying to find his room on board.

Jack Jones sang 'The Love Boat' and Charo spiced things up with a zesty guitar performance.

Princess president Jan Swartz said the company's story for the past 50 years was characterized by passion—from its passionate founder Stanley McDonald, one of the fathers of cruising, to the officers and crew and many others involved in the brand's success.

Video tributes captured highlights over 50 years and featured the origins of the company with its first ship, Princess Patricia, how Princess became the first line to use television advertising and McDonald's coining of the term 'Mexican Riviera' to lend the cachet of the French Riviera to an important early destination.

By video McDonald, now 94 and retired in Seattle, recounted how 'The Love Boat' television debut 'made the cruise industry jump ahead years and years in that one program.' He added: 'I'm so proud of the company. Princess gave me the best years of my life. Here's to another 50 years!'

One of the naming ceremony guests, veteran senior cruise executive Mark Conroy, proclaimed the evening 'amazing' and quipped: 'The good thing is the business has gotten old enough that we have a history.'