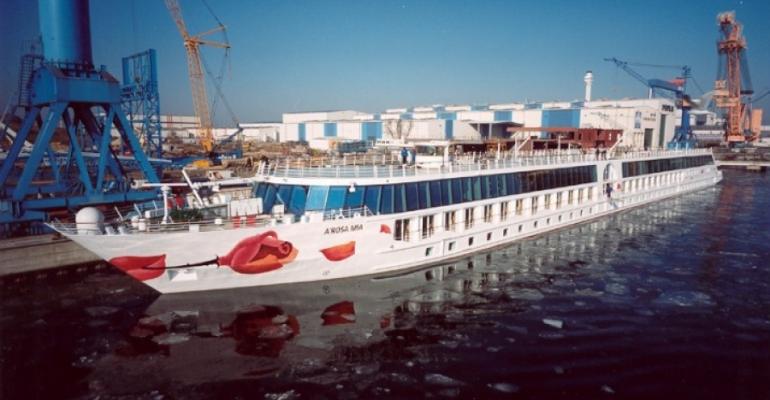 A-Rosa Mia, delivered by Neptun Werft in 2003, is being repaired in Austria after locks accident

There were no injuries, but passengers and crew had to leave the ship, which was no longer operable. There were 192 passengers on board.

Passengers on the affected sailings have been contacted by A-Rosa; some are transferring to A-Rosa Bella.

The incident occurred at 4:20 a.m. Sunday while A-Rosa Mia was about to leave the Jochenstein Locks, located in the Untergriesbach municipality at the border between Austria and Germany, near Passau.

The Upper Bavaria South Police Department said the Ukrainian captain of A-Rosa Mia had forgotten to lower the vessel's wheelhouse as the ship was leaving the locks. As a result, A-Rosa Mia hit the overhead walkway crossing Jochenstein Locks.

'The helmstand was virtually shaved off by the walkway,' the police said. As it was not able to manoeuvre, the ship was taken out of the fairway and fixed at the Danube's left bank.

Coaches took the passengers to Passau.

Damage to the walkway was minimal and restricted mainly to a rail that was repaired on Sunday, and the Jochenstein Locks subsequently returned to normal operation. Police estimated damage to the vessel at about €150,000.