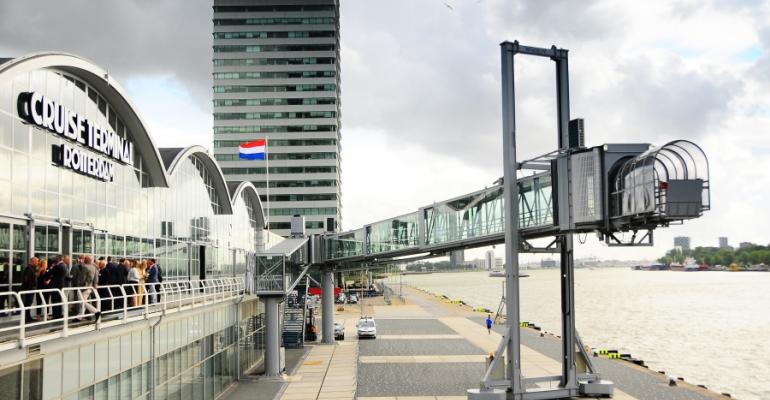 The port expects to double the number of calls in 2016 to more than 60 ships.

‘The arrival of a cruise ship in the center of Rotterdam is a fascinating experience. It is good for the relationship between city and port but additionally also good for the local economy,’ Aboutaleb said.

The municipality of Rotterdam owns the historic passenger terminal of the Holland America Line. In 2011, the building acquired the status of national monument.

Last Saturday, HAL's Rotterdam made its 100th call to its namesake city amid great fanfare, including a visit by Princess Margriet of the Netherlands, the ship's godmother. Port officials presented plaques to the princess, Holland America Group ceo Stein Kruse and Capt. Marco Carsjens.

Key features of the terminal modernisation include the renovation of the steel window frames, new windows, insulation, expansion of the luggage handling area, a new passenger bridge, new flooring and additional cargo space on the berth.

Based on historic references the color and materials chosen by Tom David Architects matches the state of the building in the early 1950s.

The city and port of Rotterdam jointly invested €7m in the improvement of the building and the berth. The project was administered by the Port Authority.

From May 2016, the terminal will welcome regular calls from AIDAprima.