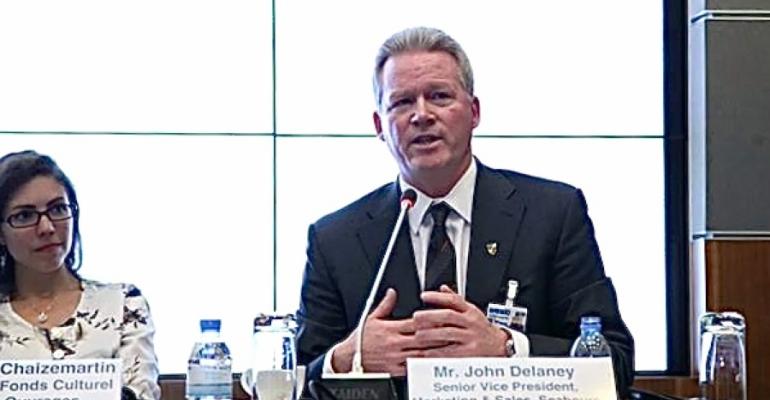 As Seabourn dribbles out details of its Adam D. Tihany-designed Seabourn Encore—expect reveals about two new specialty dining venues soon—svp John Delaney is pleased how things are going with the luxury market and his line's UNESCO partnership and heightened destination focus.

At a time of capacity growth in the luxury and upscale segments, Seabourn is more than holding its own, Delaney said.

'We took on capacity very fast in a difficult economic scenario,' he recounted of the three Odyssey-class ships added from 2009 to 2011. 'Our repeat rate is back up to above 50%. We're ready to grow now.' The booking curve has 'pushed out considerably.'

Arriving in December 2016, Seabourn Encore will replace the capacity that's exited as the trio of small original ships, Pride, Spirit and Legend, go to Windstar Cruises—a process that will be completed in the coming weeks.

'Our extra capacity [Seabourn Ovation] doesn't come until 2018 and we could use it now,' Delaney told Seatrade Insider.

'During the recession, the ultra-luxury passenger changed. They stopped buying goods but never gave up travel,' he added. Some customers sail with Seabourn two or three times a year. They are younger than in the past, and Delaney marveled over how many he sees managing their businesses from the decks of ships.

Seabourn Encore is Tihany's first solo cruise ship effort. HAL and Seabourn executives say working with the interior designer has been a dream. 'We share a lot of the same values,' Delaney explained, adding Tihany is an 'amazing' communicator.

When planning Seabourn Encore, focus group studies were conducted with 200 of the line's top US and UK customers.

While Seabourn Encore and Ovation are larger, with an extra deck, and will carry 604 passengers, up from 458, they will closely resemble Seabourn Quest, Sojourn and Odyssey.

Seabourn teamed with the Rolls-Royce and Bentley Owners Club on a book that will feature Tihany and 'the evolution of design.'

When it comes to 'the living room' of the ship, Seabourn Square, for example, Tihany's blueprint turns the design outward. At the center of this library/Internet lounge/European-style coffee bar, the concierge and guest services staff will face out, 'so it's much more welcoming,' Delaney said. In another design evolution, the Observation Lounge will gain an angled skylight that mirrors the one topping the central staircase on the existing fleet.

The larger of the two new specialty restaurants is positioned directly below Deck 9's The Colonnade, the casual indoor/outdoor spot located all the way aft. The location suggests another venue that will provide highly attractive alfresco seating.

If there's one thing that keeps Delaney up at night, it's destinations. The svp marketing and sales labors to ensure the cultural authenticity shines through. He drove the line's UNESCO partnership, which is key to that effort.

'We're raising over $1 million for them and helping create a lot of awareness about sustainability, and a lot of our values are a natural fit,' Delaney said. Seabourn cruises visit 160 UNESCO World Heritage Sites.

In February Delaney spoke at the first UNWTO/UNESCO World Conference on Tourism and Culture at Cambodia's Siem Reap, which drew 1,500 attendees including national tourism ministers. Not only was he the only cruise line speaker, he was the only private sector speaker.

UNESCO needs images to depict its World Heritage Sites so Seabourn has facilitated photographer Geoff Steven, director of 'Our Place - World Heritage Project,' to sail as a lecturer while also taking pictures. Steven is part of the 'Seabourn Conversations' program that draws destination experts including former ambassadors. He is scheduled for Seabourn Quest's 14-day 'Majestic Fjords and North Cape' cruise on July 11.

Seabourn returned to Asia this year and itineraries have included a 14-day Hong Kong-Singapore cruise sailing via the Philippines and Borneo that sold out many months in advance. Some future itineraries are a 21-day round-trip Hong Kong voyage in 2016 that overnights at Shanghai and calls at numerous ports in China, Taiwan, Japan and South Korea. In 2017, a 50-day cruise will visit 20 ports in Japan alone.

Antarctica has been a big success. Two recent back-to-back sailings scored the highest ratings Seabourn has ever had. This extraordinary destination allows the line to deliver authentic experiences with the help of a seasoned, whopping 19-member expedition team.

Even the most mainstream cruise destination, the Caribbean, has lots of gems and possibilities for Seabourn, Delaney said. A 32-day journey in December this year takes in chic island spots like St. Bart's and Iles de Saintes, while adding a Panama Canal transit and ports throughout Central America and Mexico.