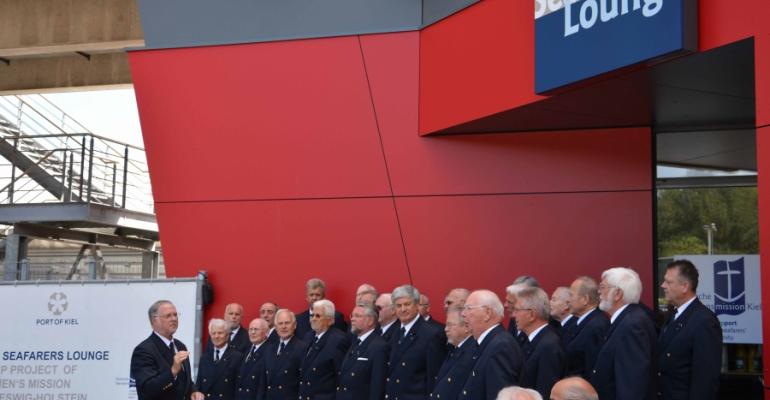 The German Seamen’s Mission has moved into a new showcase Seafarers’ Lounge at the Ostseekai Cruise Terminal in Kiel, designed for use of ship crews.

At an official opening ceremony and on behalf of the Port of Kiel, which is responsible for building the facility, Dr Ulf Kämpfer, Lord Mayor of the Schleswig-Holstein state capital Kiel, and Dirk Scheelje, chairman of the port’s supervisory board handed over a symbolic, over-sized key to Jochen Hinz, chairman of the German seamen’s mission in Kiel.

Scheelje said, ‘I am very pleased that we were able to create an area for the German Seamen’s Mission so close to the cruise ships berths. The Seafarers’ Lounge is a showcase project for the Baltic region.’

The first crew to use the new facilities were from Mein Schiff 1, which left the Ostseekai this evening at the start of a Nordic cruise. The Seafarers’ Lounge opens an hour after the arrival of ships and closes about an hour before they leave.

The construction of the new €400,000 facility, was made possible by support from the state of Schleswig-Holstein, the International Transport Federation (ITF) and the Port of Kiel.

During the opening ceremony Dr. Frank Nägele, State Secretary in the Schleswig-Holstein Economics Ministry handed over an authorisation granting about €300,000 from funds earmarked by the German Government for investment in seaports. ‘The Port of Kiel has already done a lot to create outstanding infrastructures for cruise ships and their passengers,’ he said. ‘With the new Seafarers Lounge, the crew have now also been taken into account in such an exemplary way. Within their often hectic working environment the Seafarers’ Lounge will offer privacy and a place for personal discussions,’ Nägele added.

This year, 22 different cruise ships will make a total of 125 calls in Kiel, with around 100,000 crew members onboard.