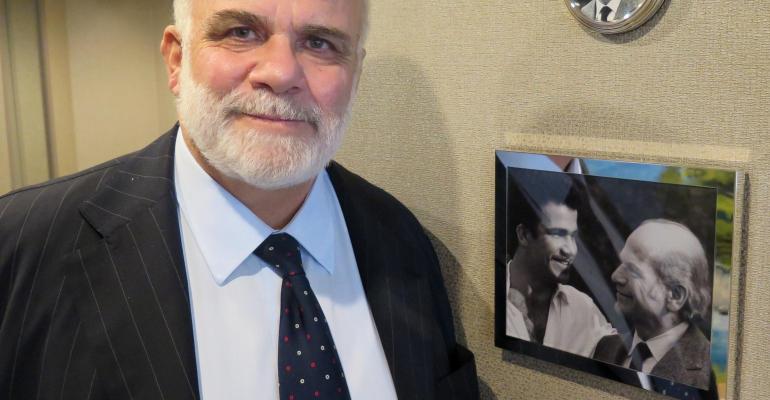 'We're still defining the exact capacity and whether to build one or more ships, the same size or different,' Lefebvre said. In any case, capacity wouldn't be greater than 240 passengers.

He added there are plenty of yards, including new entrants, that are eager to construct small vessels.

Expedition newbuilds would be in addition to the options with Fincantieri for up to three sisters of the newly minted Silver Muse.

Lefebvre doesn't envision novel propulsion such as LNG for the expedition fleet; it's not feasible for far-flung deployment to hundreds of ports. Or fuel cells—at least 'not yet.'

Silversea isn't daunted by the expedition newbuild plans of other operators or the fact that places like Antarctica may have to further limit landings due to more ships visiting. Lefebvre said older tonnage will go out of service, reducing capacity, and he thinks some of the ships announced by others won't get built.

Asia, particularly, offers 'incredible' opportunities for expedition cruising. Lefebvre has visited Silversea destinations like Komodo, Borneo, Papua New Guinea, the Andaman Islands and (Australia's) the Kimberley, and he's keen to go to the Solomon Islands next.

When it comes to expanding destinations, they don't necessarily have to be ports. The line's scuba cruises, for example, provide exploration of sites like the scores of Japanese battleships and aircraft sunk off Palau.

In the Americas, Lefebvre views Colombia as a 'top destination,' with 'fantastic' places like Medellin that can be visited on pre- or post-cruise land tours. Parts of South America are 'untouched.'

With a fleet of nine ships thanks to the addition of Silver Muse, the line visits what might be an industry-leading 761 destinations, 585 of those in the expeditions lineup.

Lefebvre is 'very happy' with the response to Silver Muse, and said the luxury sector is performing well thanks to strong consumer confidence, the record US stock market and the growing demand for travel, especially in the upscale and expedition segments. At the same time, fuel prices are low and the geopolitical environment is more stable, notwithstanding recent attacks in London, Stockholm and St. Petersburg.

People seem to get over those, and travel continues.

'2017 is strong, and 2018 is going the right way,' the chairman said. Silver Muse, specifically, is 'very strong in pricing and load factor.'

The success of the company's $550m bond offering was a big boost, with the issue far oversubscribed. ($275m was the initial goal.) This gives Silversea flexibility with capital expenditure plans like the conversion of its original ship, Silver Cloud, for the expedition fleet later this year. A spring drydock is in store for Silver Explorer, and a 'major transformation' of Silver Spirit is planned, details to come.

At least $170m is going into the ships, Lefebvre said, 'maybe more if necessary.'

When it comes to China, the joint venture with the Plateno Group for marketing and sales throughout mainland China, Hong Kong and Macau is going 'incredibly well.' Last year Silversea scored two Chinese charters and further cruises will be dedicated to the market. Otherwise, a limited number of Chinese travelers are being sourced for the line's regular sailings.

As for building cruise ships in China, Lefebvre said the multi-ship order by Niels-Erik Lund's SunStone Ships and China Merchants Industry Holdings is a good beginning. 'They're doing the right thing by starting with small ships,' he said, and involving seasoned players like Norway's Ulstein Group and ship designer Tomas Tillberg.

All in all, it's a good time for the industry, and for Silversea.

Lefebvre is delighted to have long-time friends Roberto Martinoli on board as chief executive, Barbara Muckermann as chief marketing officer and Mark Conroy as managing director, the Americas. 'It's a family,' he said.

Family artworks, some favorite books and a brown leather Chesterfield chair and ottoman from the former family residence in Rome are there, too. The suite will be stocked with vintage port, personally selected by Lefebvre.

(For a roundup of recently posted articles on expedition cruising see In Focus section at the bottom of the Seatrade Cruise News homepage.)